I’m not sure why I decided to join photographer John Barclay on a photo tour of Fonthill Castle. Fonthill is the name of a bizarre home built by a wealthy eccentric named Henry Mercer in the early 20th century. Located in Doylestown, Pennsylvania, it consists of a strange layout of rooms which are connected by narrow, twisting stairways and hallways. The castle is also loaded with an unusual collection of art, artifacts and antiquities.

To say I was out of my element is an understatement. I’m a landscape photographer, so why was I dragging my camera around this strange castle? After a few deep breaths and a couple of test shots, I realized why the nine other photographers in the group were running around this place. This is not just the former home of an eccentric millionaire, it is a study in composition. Fonthill is like a training ground that helps you learn to organize  cluttered subjects into neat compositions. This is done by harnessing the angles and lines from the unusual architectural design of the interior spaces.

Light spilling through the windows is a popular aspect for Fonthill photographers to capture. It adds more opportunity to build angles and lines into a composition. 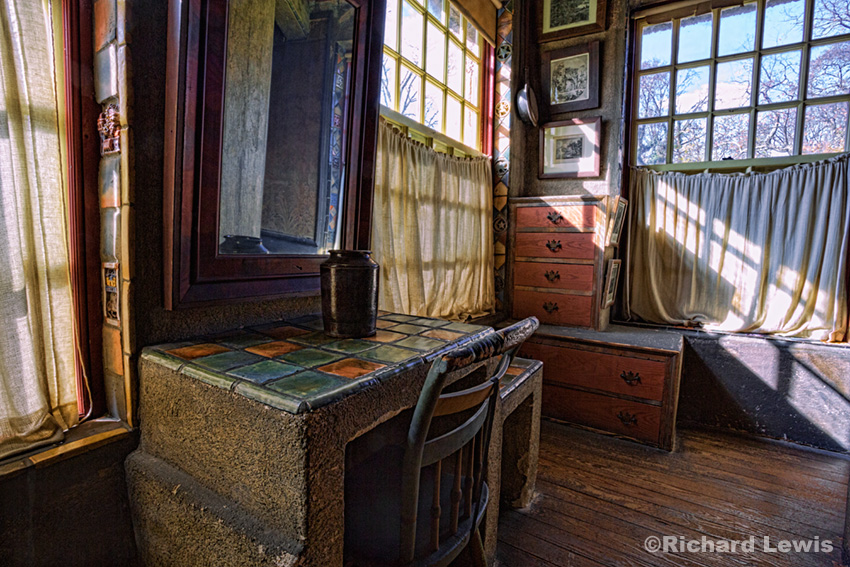 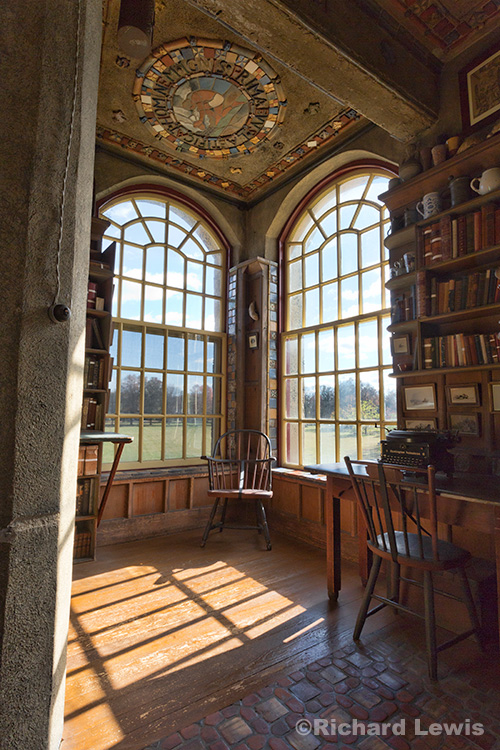 I noticed this fireplace right away, but realized a minute later that the angles of the walls and shelves were what I really wanted to photograph. Note, this photo was processed using Topaz Impression, although the effect was added subtly. 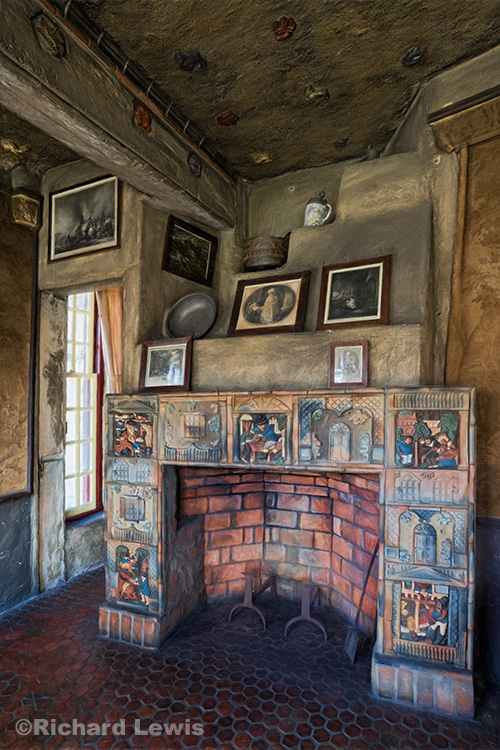 This photograph is almost abstract, showing one of the many narrow hallways and columns decorated with colorful “Mercer Tiles” and old tapestries. 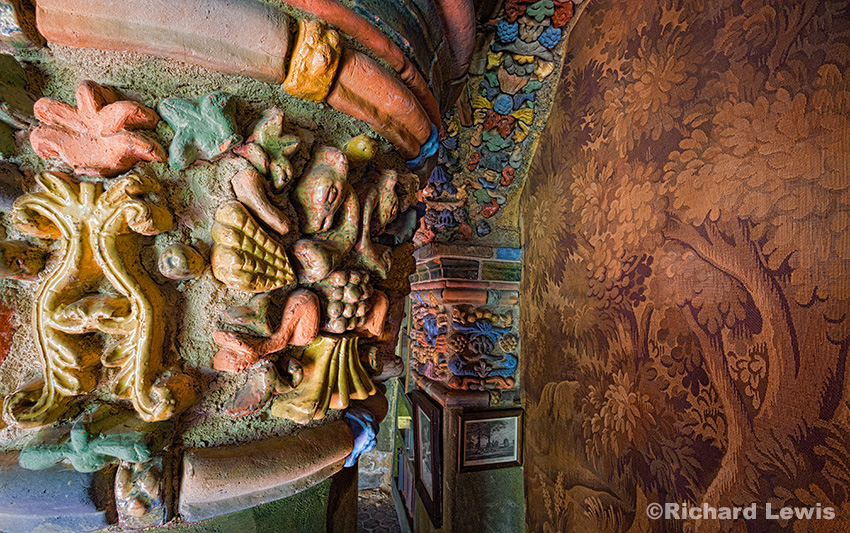 Fonthill Castle, as strange as it looks, actually blends well into the environment because of its color and placement. 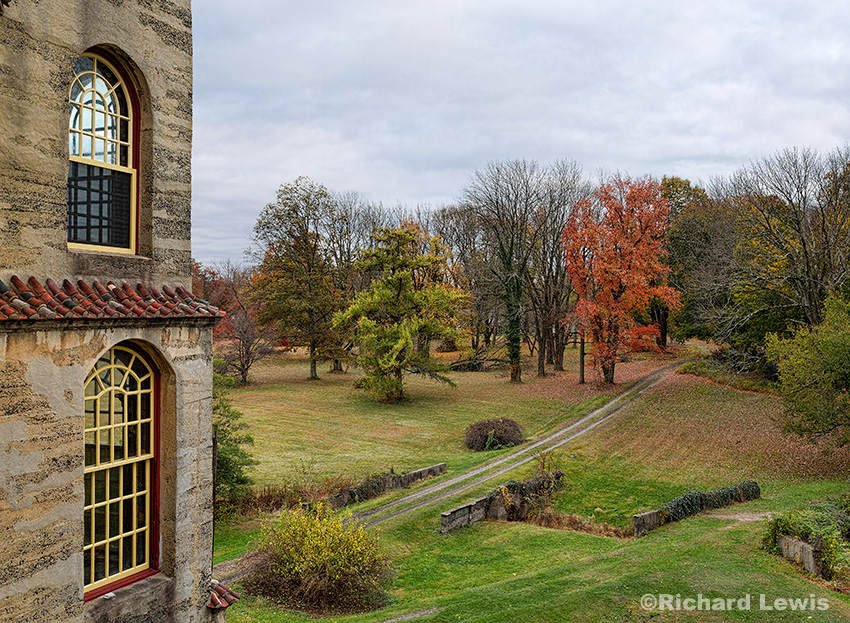 Fonthill from the Balcony by Richard Lewis 2014

I had originally intended to photograph Fonthill in black and white, but the bright and muted colors were just too enticing. However, with black and white the range of light and tone look so nice. 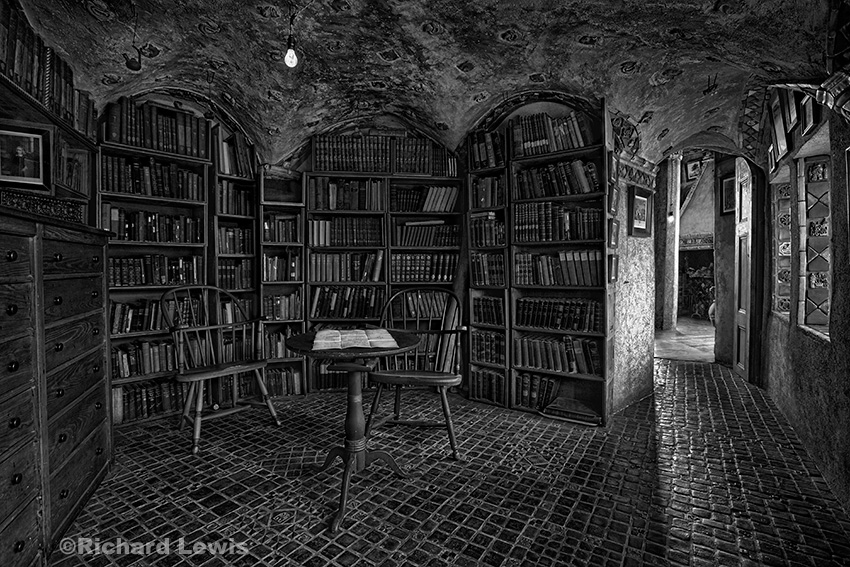 How I Did It. – Fonthill is a dark place with very bright windows. Most photographers use HDR or “high dynamic range” photographic techniques, to deal with the range of contrast. I don’t like the unreal effects of HDR and surprisingly was able create final photographs from single images. In “Room Detail 3” the window on the right was added from a darker exposure to get more detail of the outside.