An evening on the Ben Franklin Bridge

What makes South Jersey an interesting and unique place to live is that you are close to the wilderness forests of the New Jersey Pinelands and the City of Philadelphia. One can enjoy both city and country life without traveling very far.

There is a pedestrian walkway on the Ben Franklin Bridge that spans the Delaware River and connects Philadelphia, Pennsylvania to Camden, New Jersey. I had known about this walkway, but never gave it much thought. Then I saw photographs from the walkway taken by a few photographers I know. When it looked like a nice sunset was on the way, I headed over there to see what would happen.

The pedestrian walkway on the Ben Franklin Bridge is sort of a world unto itself…at least it felt that way. This world is populated by “movers” who are running, cycling, and walking to exercise or get somewhere, and “lingerers” who are taking pictures or just admiring a stunning view of the Philadelphia skyline. While setting up my camera I met a fellow lingerer from Germany who was taking in one last American sunset before heading home the next day.

The sunset did not disappoint either of us. I stayed until dusk to see the city light up. 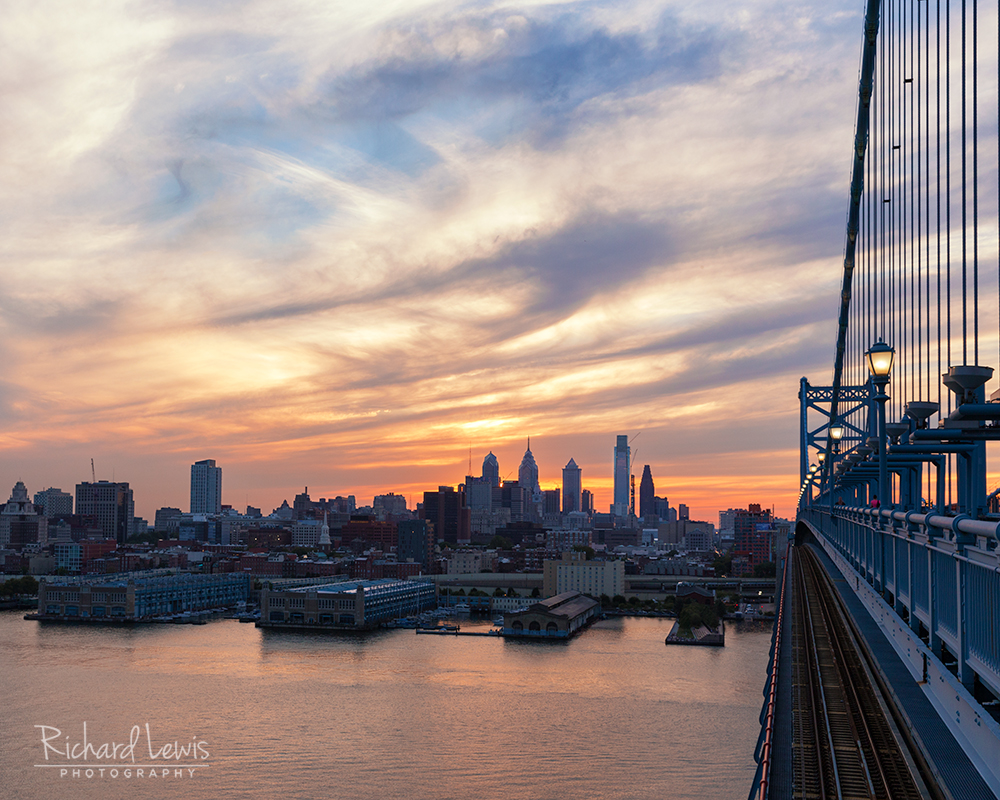 Philadelphia In The Early Evening by Richard Lewis 2016 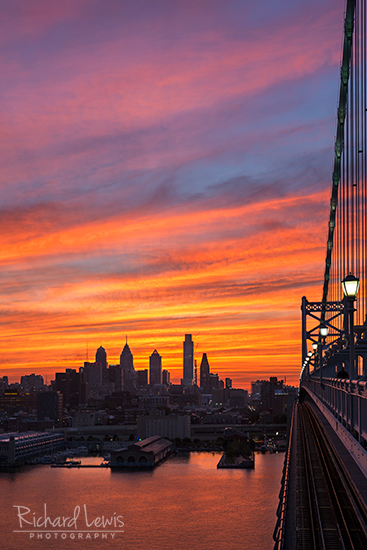 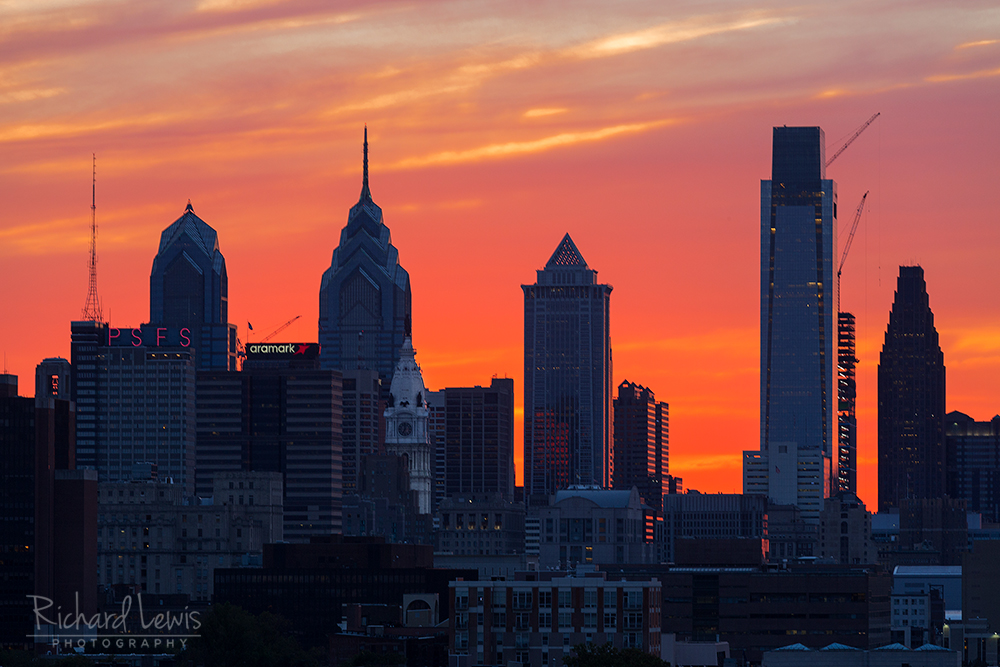 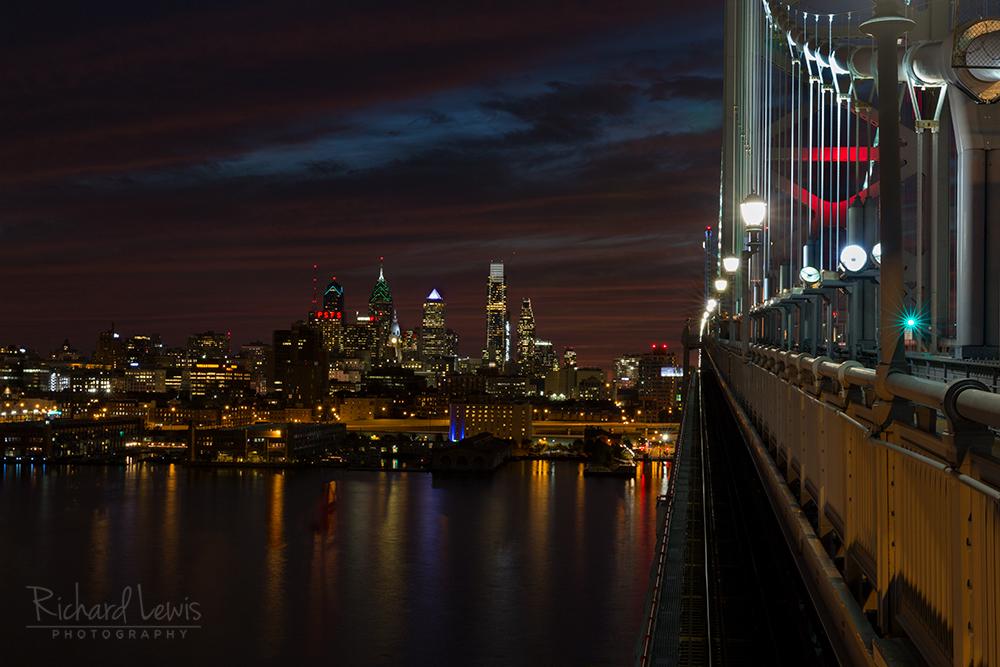 As much as I like the above photographs, the one below is my favorite of the evening. This was the last location along the walkway I photographed. I shared the spot with a young photographer who rode his bike there. A cyclist and photographer? What’s not to like about this guy? This spot turned out to be a great place to just be with the bridge for a while. All of those lines and colors made you forget about the cities this bridge connects and provided a cozy little spot to create. 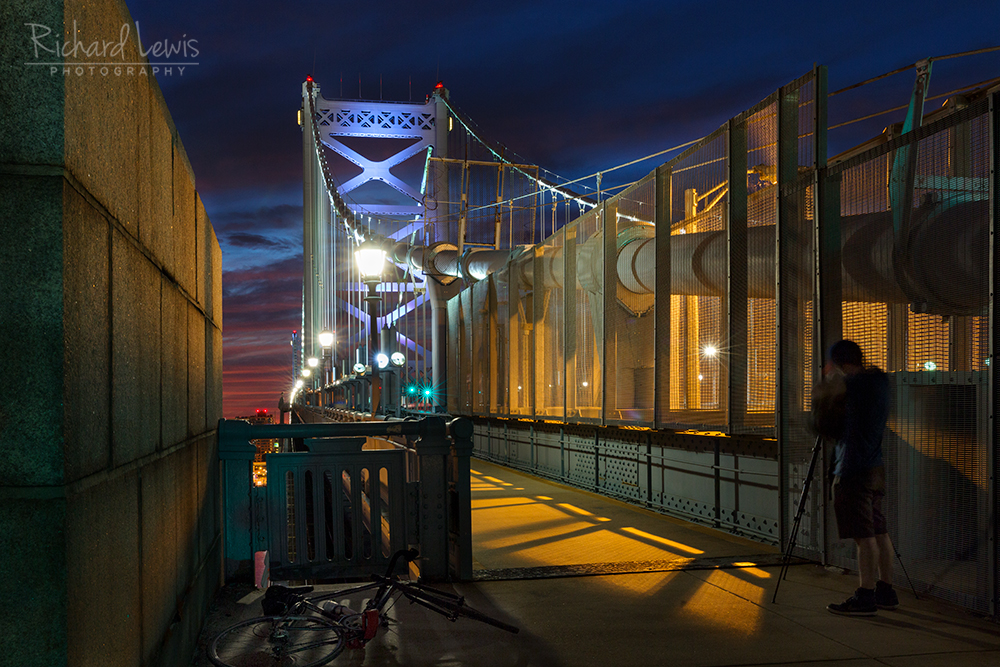 The Cycling Photographer by Richard Lewis 2016

Technical note about the above photograph: This is actually a composite of two images. The towers of the bridge are lit with blinking red and blue lights. While the photographer was taking his shot, the bridge tower was between flashes and unlit. I made a second exposure with the tower lit and blended the two together in Photoshop.

General technical notes: All of these images were made using a tripod, however photographing on a bridge is challenging because the bridge tends to shake as vehicles move across it. It was tricky to keep the shutter speed fast enough to prevent a blurry image from camera shake, but still not have to set the ISO too high. All but the last photograph were made at either ISO 400 or 800 (normally I shoot landscapes at ISO 100 or 200). I tried to keep the shutter speed to around 1/30 or even 1/15 of a second with an f stop of 11 to 16 to provide the depth of field needed. One thing I tried to master was predicting when the bridge was going to shake the most based this on the sound of the traffic. Despite this, about half of the images I shot were blurry. This is why it’s good to take a lot of images. 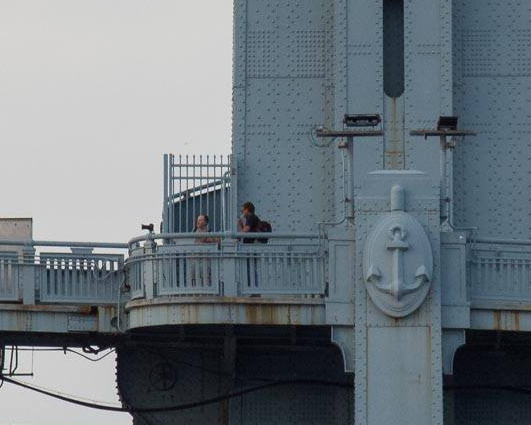 Caught In The Act

Nice sunsets and city skylines attract the attention of photographers. Apparently while I was on the bridge, Dante Fratto, a fellow South Jersey photographer whose work inspired me to take these photographs, was on the Camden, New Jersey waterfront photographing the sunset from that vantage point. He snapped this photo of me. I’m the one closest to the camera and tripod.