A Shipwreck, A Full Moon And A Fabulous Sunrise

Stories abound about how this schooner ended up as a shipwreck in the Delaware Bay. Perhaps it is a ship that was bound for Fall River Massachusetts with a load of coal and ran aground in 1876. Another tale tells of plans for this old wooden ship to be converted to a restaurant, however it got stuck in the sand after it broke free from the boat towing it and was left.

No matter how it got here, this shipwreck on a remote beach attracted my attention. It is only accessible briefly at low tide and takes some careful planning to get to. When the full moon, sunrise and low tide all lined up, I decided that I had to be there. The weather forecast was dire most of the week before the shoot, vacillating back and forth between rain and heavy cloud cover. Darn! It  would be a shame to lose this opportunity due to a rainy or 100% overcast day. Luckily, the evening before this trip the forecast changed so we decided to give it a go. Visible moonlight in the wee hours of the morning was encouraging. When finally arriving at the shipwreck, we were rewarded with a dissipating weather system that lead to some fabulous morning light.

5:18 – 5:29
The early twilight and full moon provided an eerie light to begin this photoshoot. 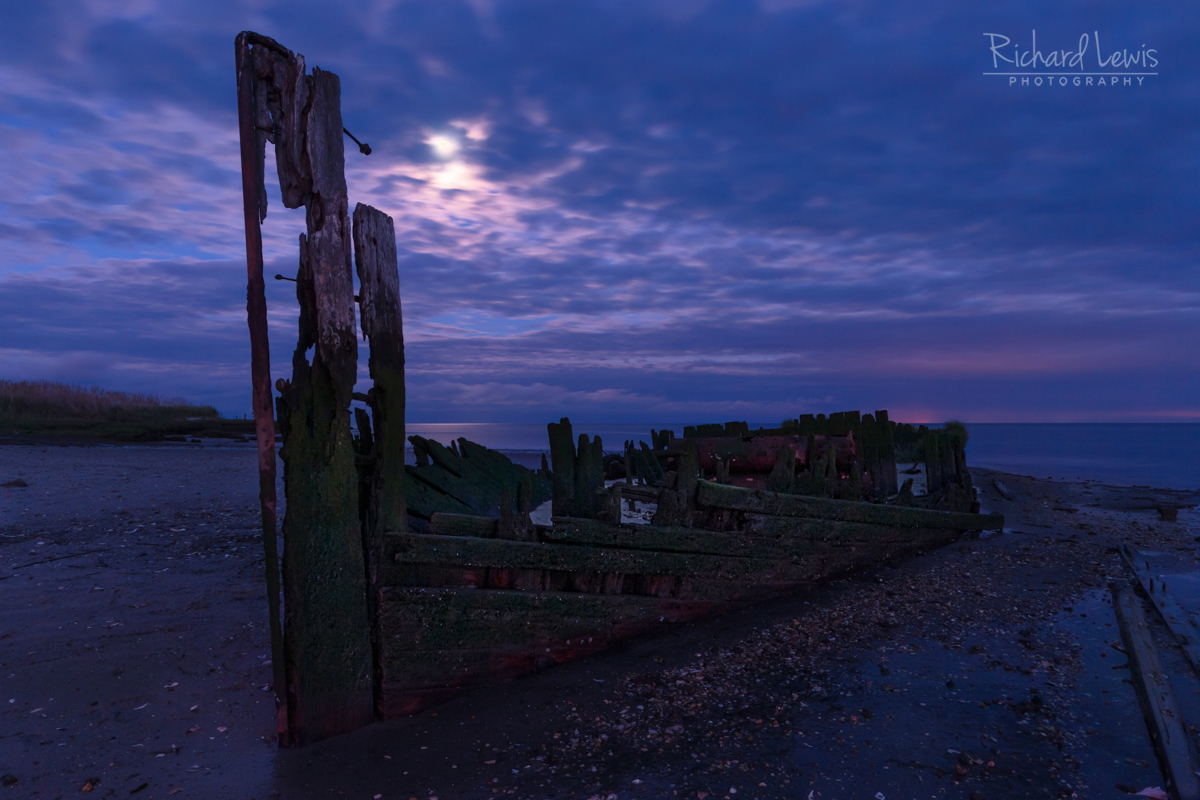 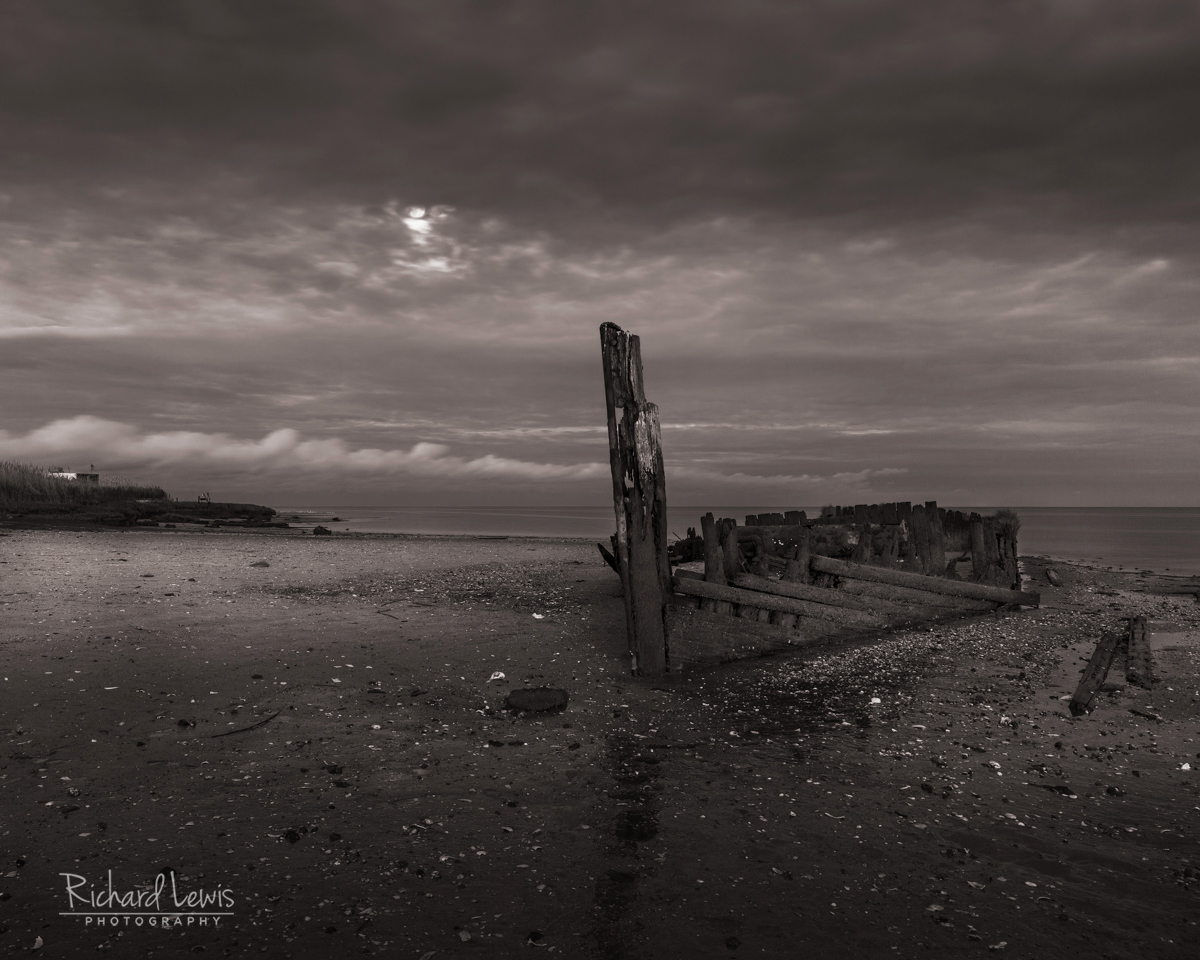 5:37
Dawn breaks and the horizon started to light up. 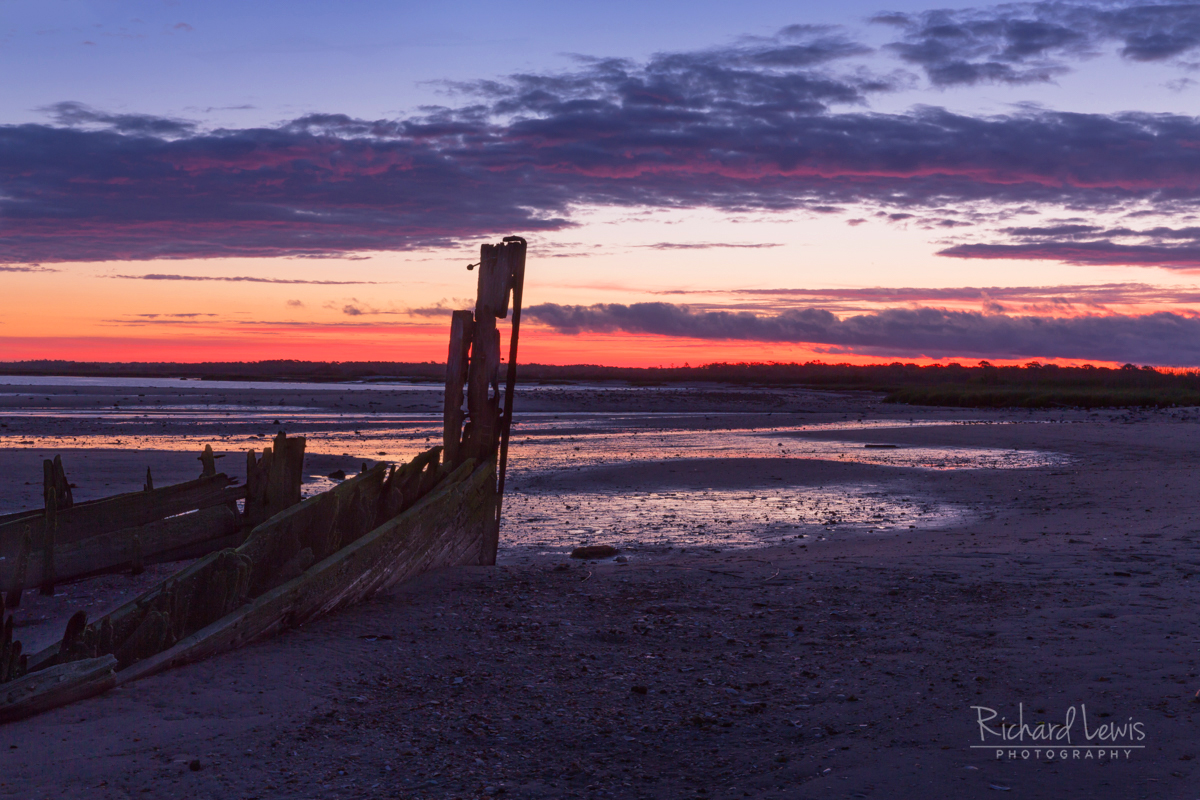 Shipwreck At Dawn by Richard Lewis 2017

5:55
The sun breaks through a cloudy horizon and colors the sky. 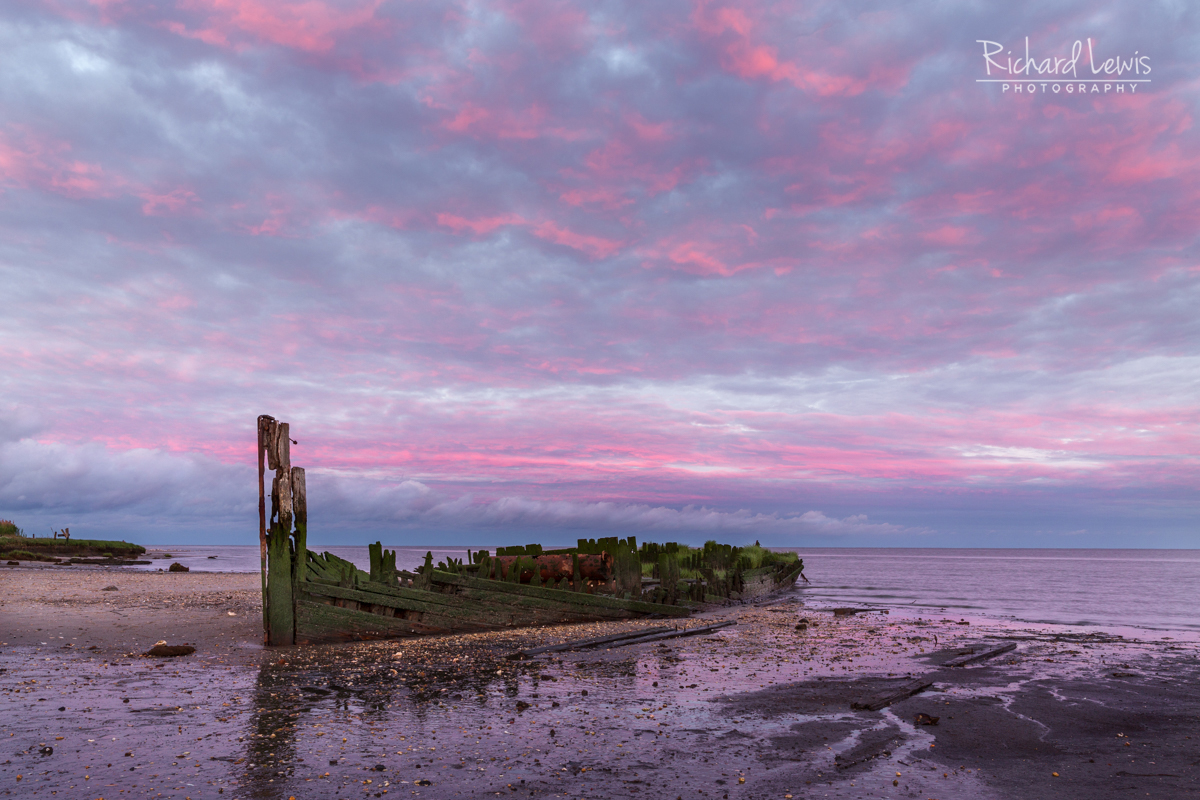 Dawn On The Delaware Bay by Richard Lewis 2017

6:08
The light continued to be beautiful but the window of safety started to close. 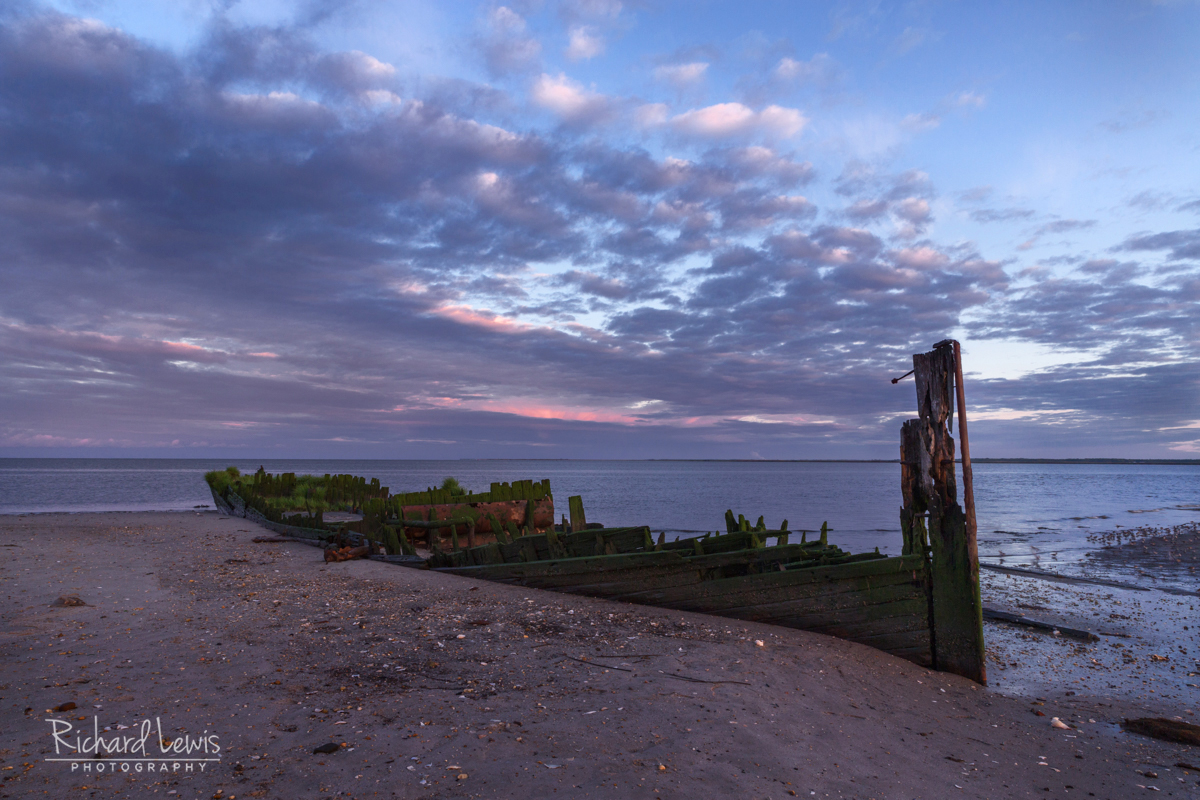 It would have been great to spend another hour or two photographing the weathered details of this old wooden schooner. But when the tide started coming in, we needed to get back to avoid being stranded like this ship. There will always be other low tides.

After finishing the first five images in this series, I kept thinking about how this once useful ship is slowly deteriorating in a harsh environment where it spends a lot of time under water. The image below is the result of that musing. It transcends the timeline of the images above because it is more of a creative concept based on feeling and not fact. The ability to post process a digital photograph allows photographers to create imagery that goes beyond the literal visual interpretation that comes out of our cameras. It blurs that fine line between the literal and the abstract. 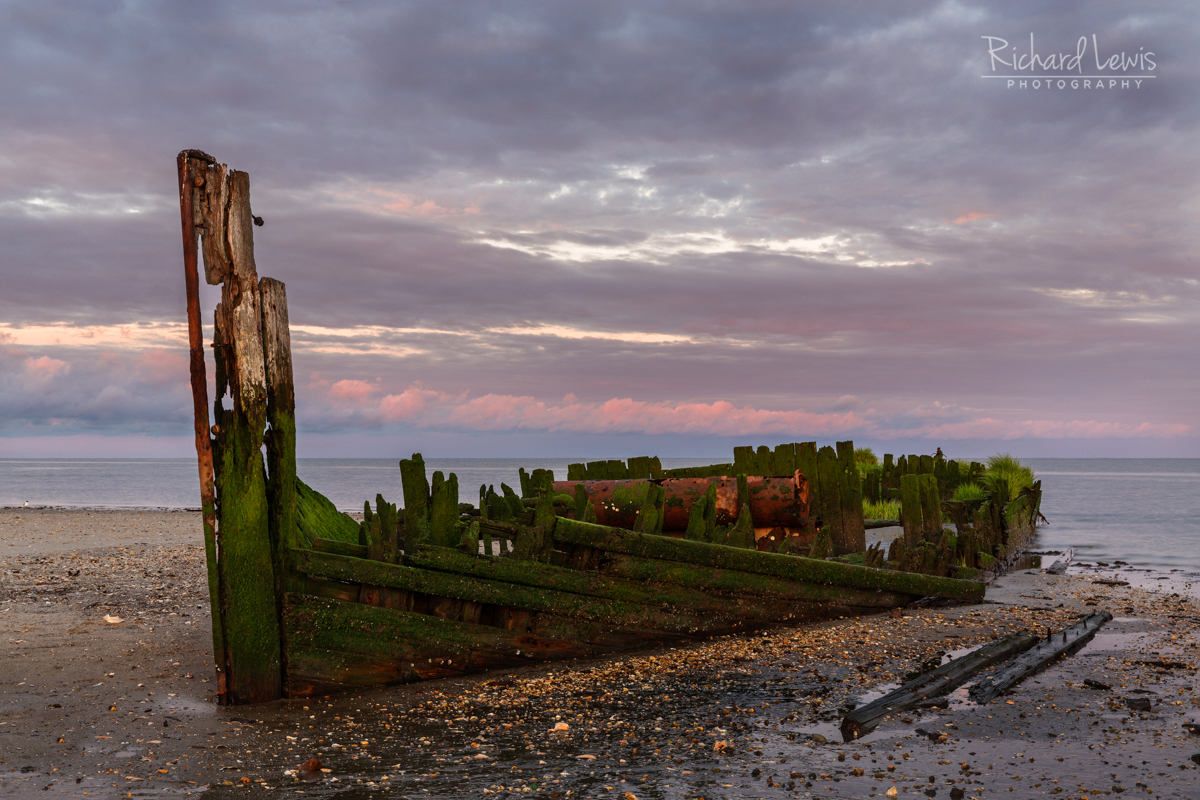 Stick To The Plan With Your Eyes Open

This was one of those shoots that required a lot of planning to execute. First there was researching when the moon, sun and tides would line up. Next I used an app called Photo Pills that shows sun and moon positions at a specific location and time to plan where the best camera positions would be. Finally there was the obsessive following of the weather to ensure this opportunity would not be rained out or socked in with clouds.

Through the research I visualized the images and the first two photographs in this series are the result. After creating them I could have left happy, however, watching the sky showed that there was potential for some great light at dawn, so we took advantage of it while we could.

Inspiration is an important part of developing photographic vision. Two of the local photographers I follow, sometimes literally, are Jason Gambone and Dante Fratto. While our styles are different, through their work I saw the potential of staying around for the sunrise. As a result, this is now a series of six photographs instead of two.