The previous post about our fourth trip to Joshua Tree National Park challenged landscape photographers to think differently in places that they photograph on a regular basis. Here is another little project that resulted from this challenge.

For me the purpose of night photography is to portray the solemn and quiet mood of the night. Light painting in night photography can cause the landscape to be overwhelmed with bright lights and “spoil that mood” so to speak. However, having a little extra light can come in handy as a fill light or to create the illusion of another natural light source.

The weather forecast in Joshua Tree National Park called for cloudless days while we were there. Since our last trip yielded dramatic skies and a crazy storm, I decided spend some time working in the twilight hours to find some interesting light. The challenge was to show the details and textures of those beautiful, surreal rock formations when they were in near darkness and backlit. The the only tool I had was my trusty headlamp. It casts a nicely diffused light that doesn’t overpower the ambient twilight. What do you think? Feel free to leave a comment below. 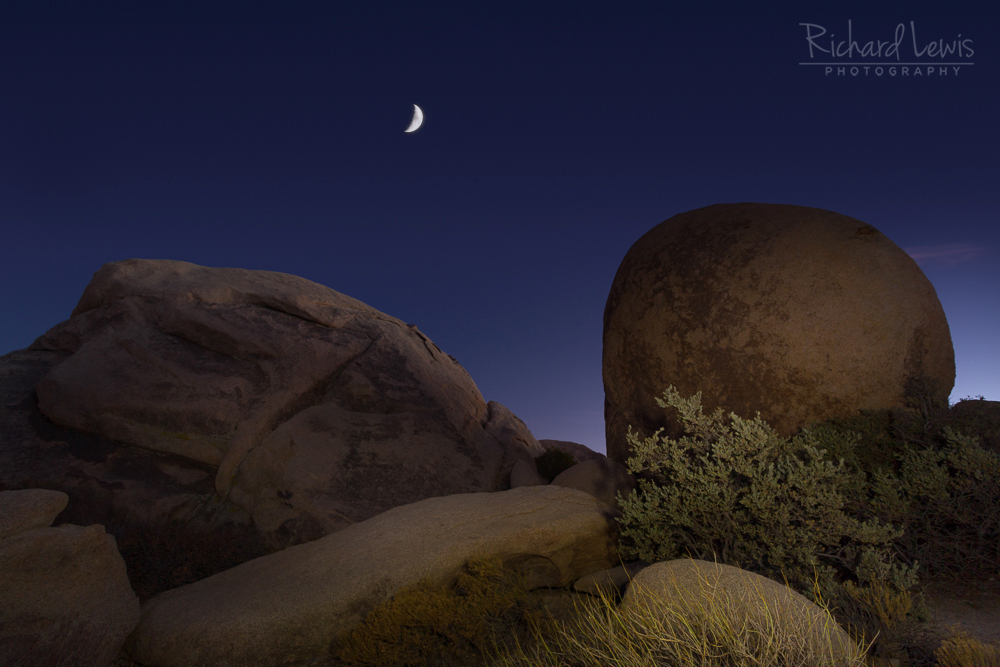 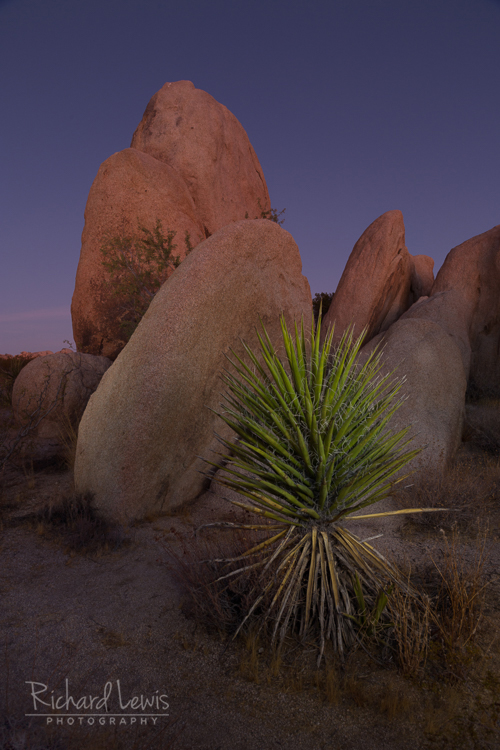 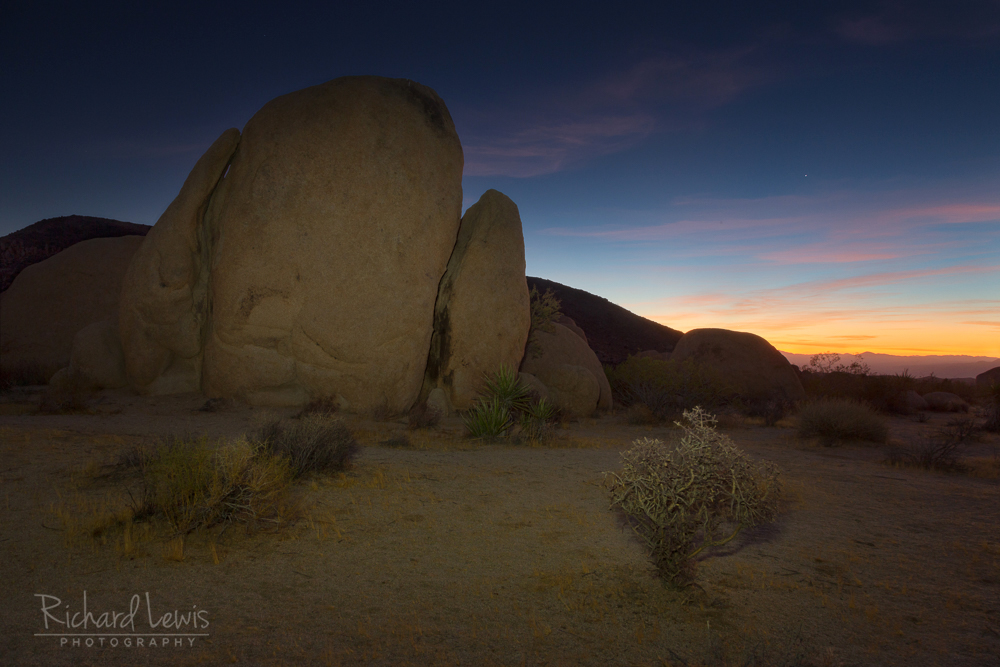 Don’t Stare At The Sun

On our last morning in Joshua Tree I headed to the popular Key’s Overlook to continue photographing the early desert twilight. As the day started to break, the unexpected nice morning light was far superior than what I was getting earlier. You just can’t beat a beautiful dawn in the desert.

At 5:30AM I had the overlook to myself. As it got closer to sunrise, a few other people showed up to watch the sunrise. Most were taking pictures and pointing their phones and cameras at the spot where the sun would rise in a cloudless area of the sky. Like most serious landscape photographers, I’ve seen a lot of sunrises. After a few hundred times, the sun rising into a plain blue sky just isn’t as interesting as it probably is to people that don’t get to see it on a regular basis. It’s a powerful experience, just not necessarily a photogenic one.  What is very important is that sweet “Golden Hour” color which is not necessarily where the sun is. The first two photographs below were made at about 30 and 180 degrees away from  the sun. 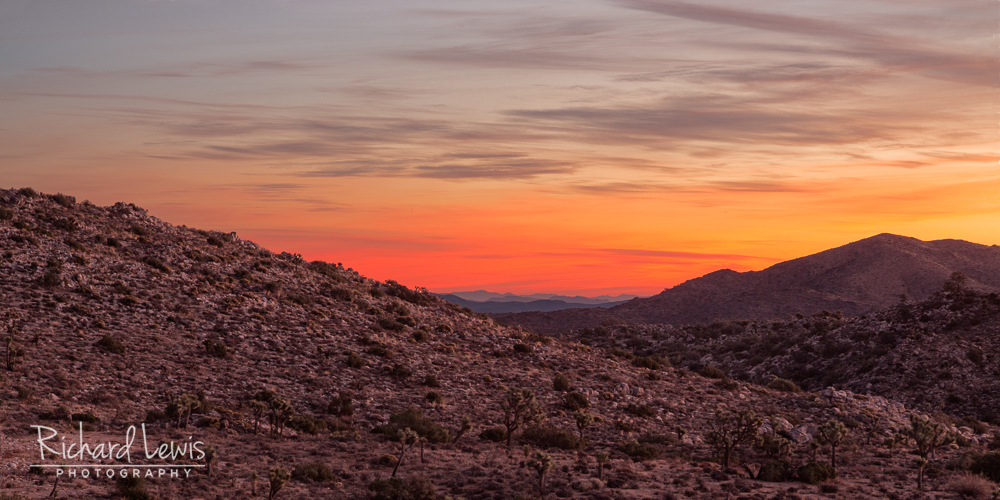 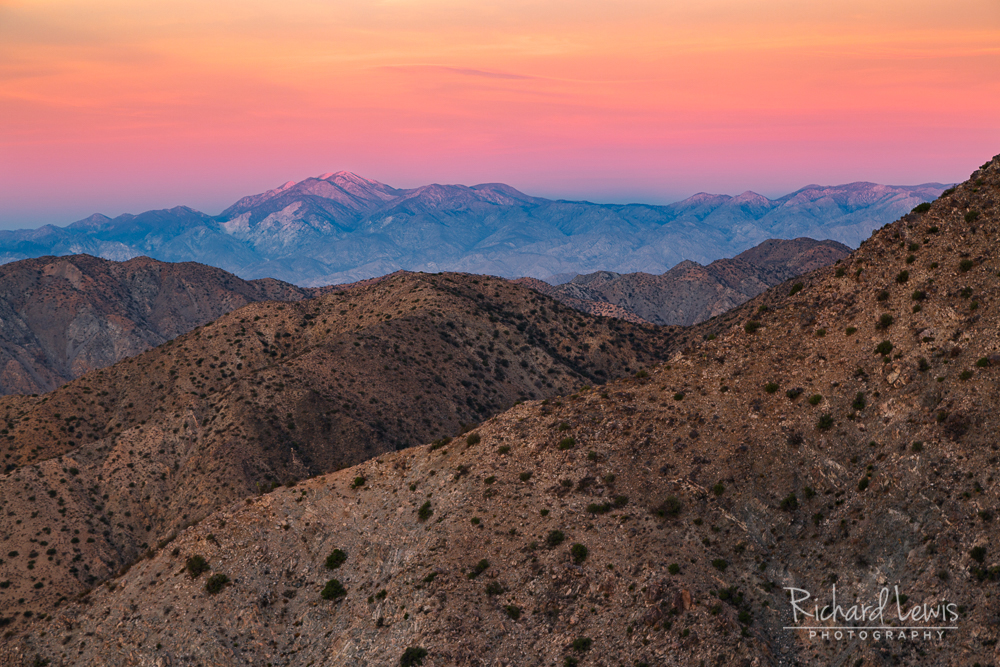 This last photograph at Keys Overlook was made just after the sun came up and I loved how the light was spilling between the mountains and backlighting the plants on the ridge that I was standing on. 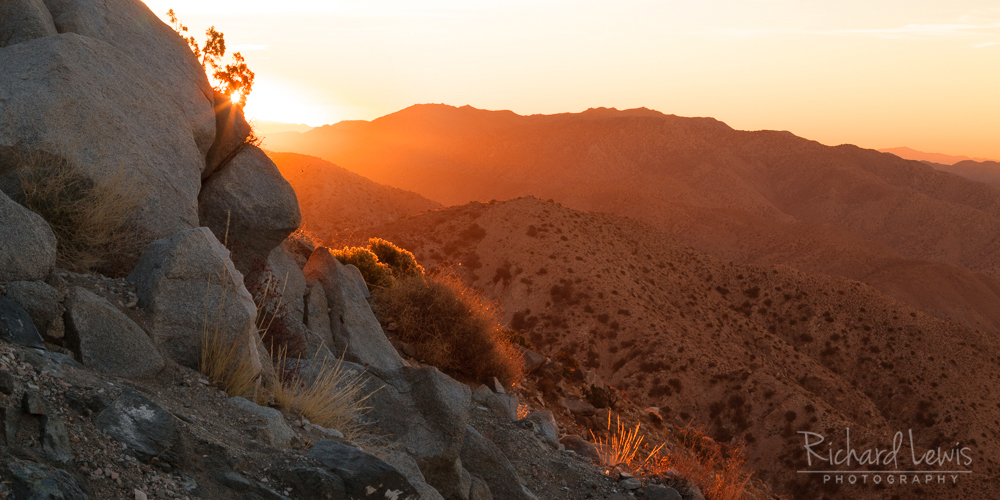 Barker Dam was built in 1900 to supply water to local ranchers. It is the only place in Joshua Tree National Park with standing water. The hike there is short, but I considered whether or not to bring a camera. It was a hot day with harsh light from a cloudless desert sky. Plus, the water levels were low which would make the lake formed by the dam look more like a mud hole. Why carry all that camera gear if it won’t make it out of the backpack? Well, I took it anyway, and found an interesting tree in a nice spot displaying some nice fall color. 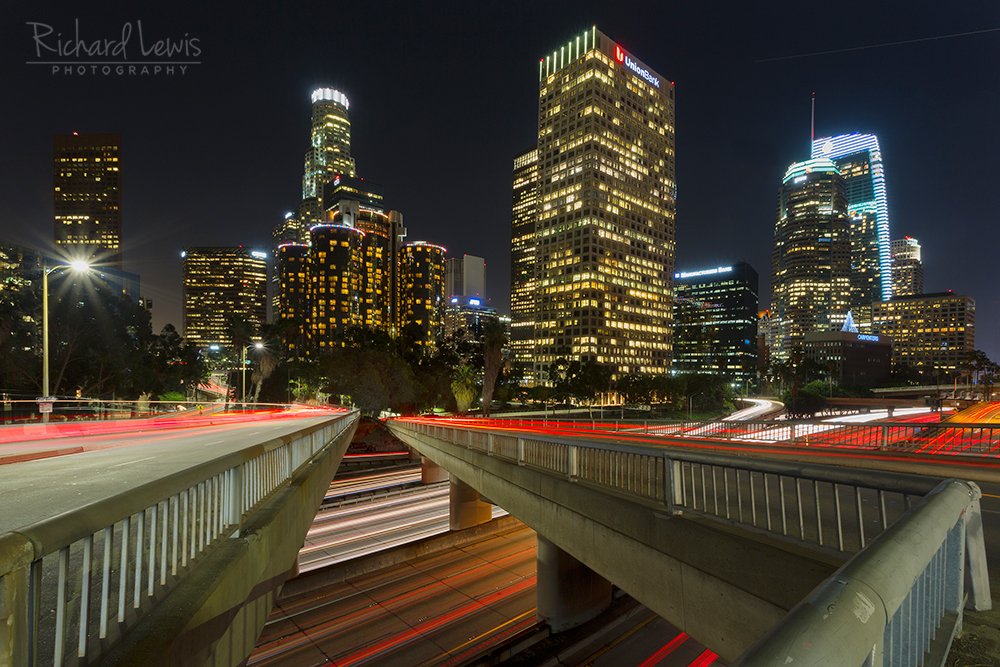 I’m learning to love Los Angeles as a photographic subject. If nothing else, it is an interesting juxtaposition to the natural landscapes of Joshua Tree National Park. The neat thing about cityscapes is the ability to compose with straight lines. Plus, at night, the landscape light paints itself.