A Northeast Vision Of The Great Northwestern – Part 2

Olympic National Park in Washington State has a small beautiful area of scenic Pacific coastline. In a previous post, I mentioned a persistent haze from forest fires that caused us some issues in Mount Rainier. Along the Pacific coast it was the fog. That fog was relentless at times, either obscuring the beaches completely, or just bad enough to flatten the light and hide any details in the beautiful sea stacks.

When the fog lifts (even partially), one can see that these rugged beaches are a small but significant part of the almost million acre Olympic National Park. Fortunately for this trip we elected to concentrate on a few areas in Washington instead of covering the entire Pacific Northwest. This allowed us to visit the Olympic Peninsula beaches many times. Usually the infamous fog was so thick we couldn’t see a thing. Once in awhile though, conditions allowed enough of a view to create some interesting compositions. 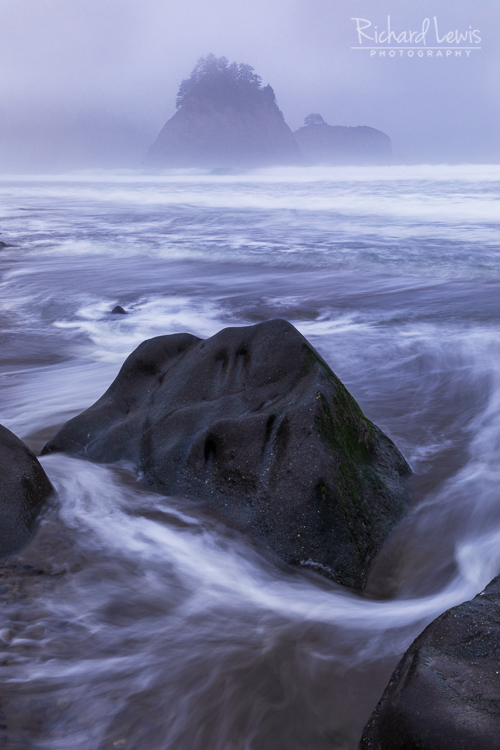 Persistence can pay off. On our last evening in the area we were really hoping to see a sunset from one of the beaches. After days of arriving at places that were too socked in with fog, we decided to take a hike to a beach with the catchy name of Second Beach. My theory was that this beach would be a good place to be because it faced south. Not only would we be in a great position for a sunset along the beach, but the southern exposure might mean less fog.

So much for theories. When we arrived… more fog. It also looked like the sunset we’ve been waiting 3 days to see was going to be obscured, again. But then… 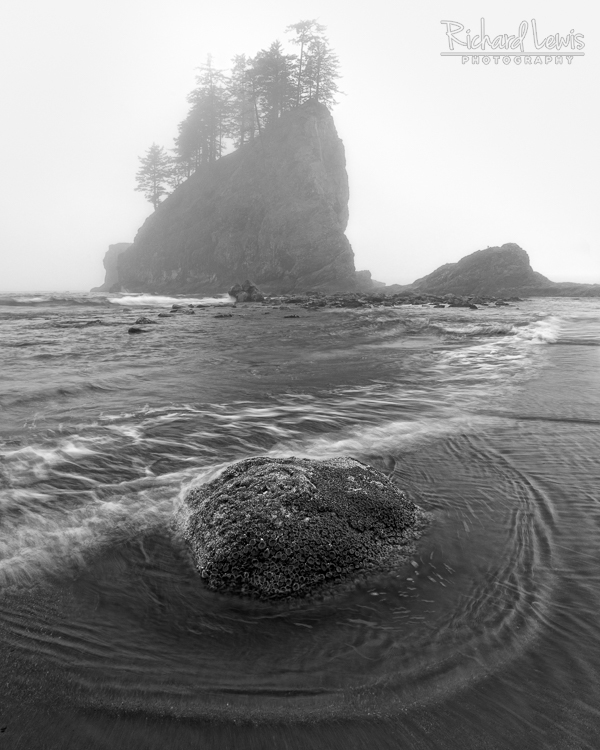 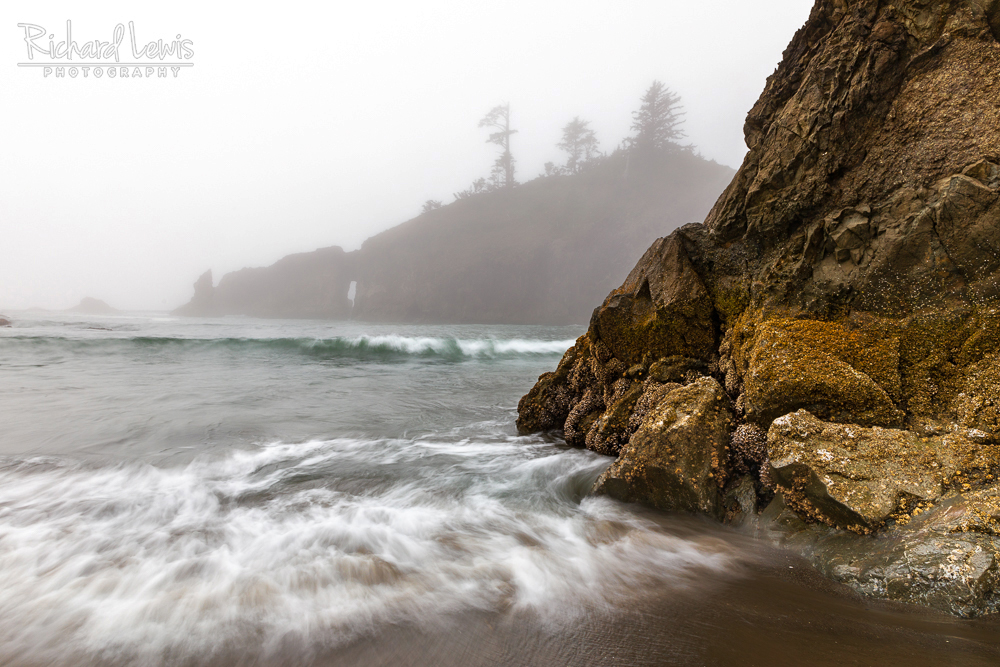 …shortly after the above photographs were made, a small break in the fog appeared along the horizon. It was about an hour before sunset and it looked like the fog might clear in time. It could not have been better. The beach we were on had a rock wall with an natural arch. As the sun was low on the horizon, it shown briefly through the arch and created a beautiful glow through the remaining mist. 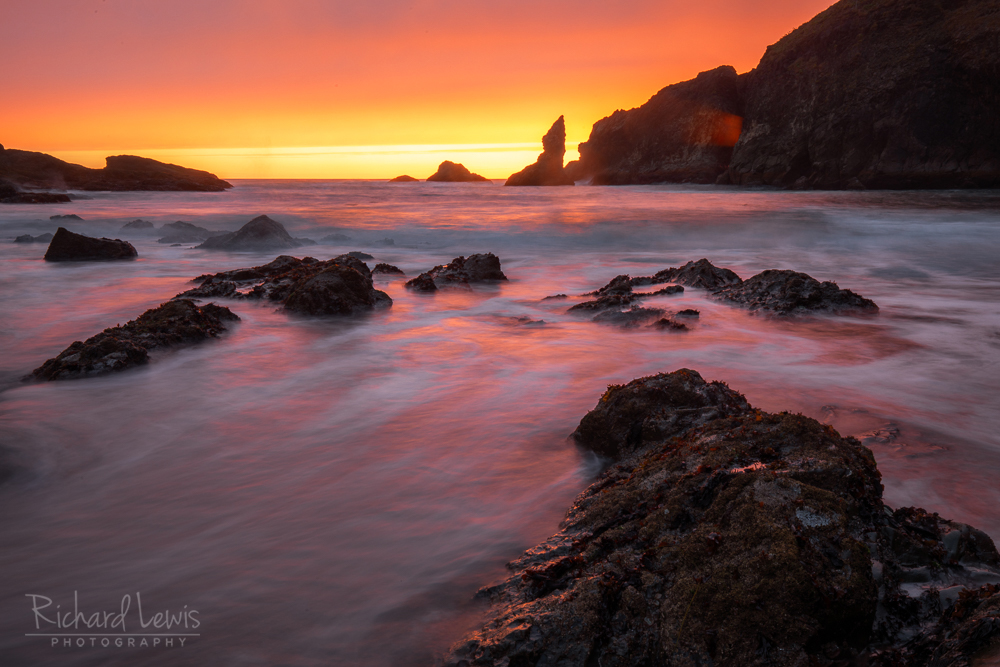 Sun Beam Through The Arch by Richard Lewis 2018 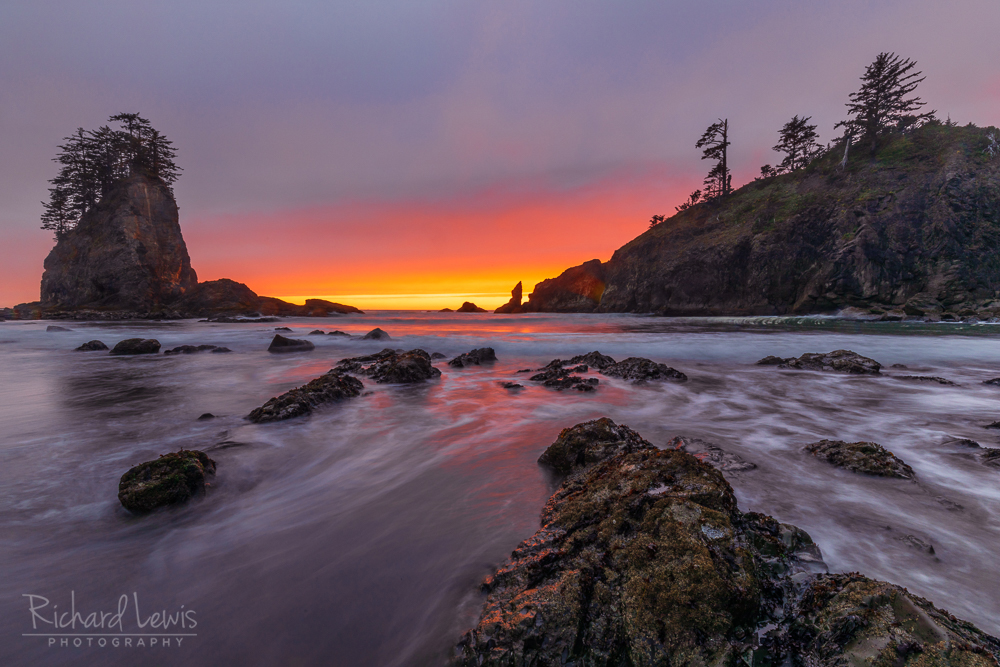 I was shooting with a 16-35mm wide angle lens and didn’t want to change lenses which could possibly mean missing the glow and exposing the inside of my camera to the windy, sandy, and salty environment of the beach. Fortunately, my wife, Vivian, had the zoom lens with a slight telephoto on her camera and caught the glow. Please welcome her first photograph on this blog. 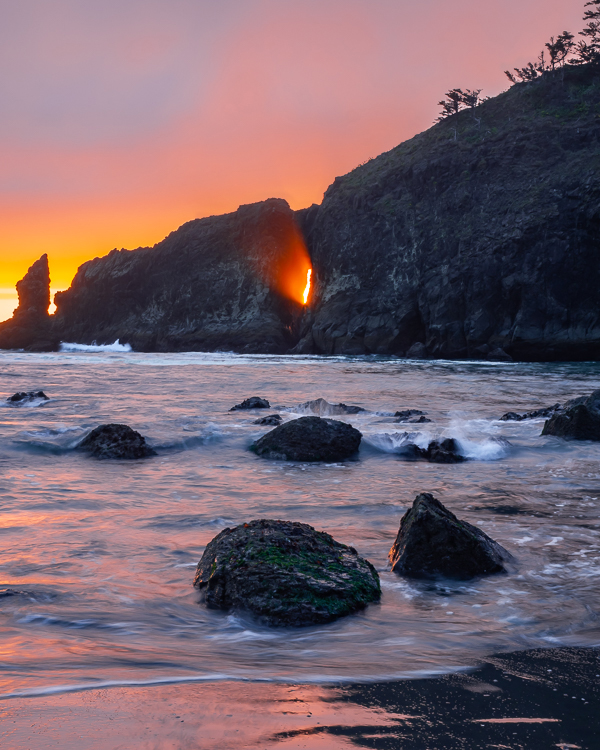 As sunset became twilight the beauty didn’t stop. Sunset colors can be very dramatic, but the solemn quiet of twilight has always appealed to me more. We decided to skip dinner and hang around until dark. 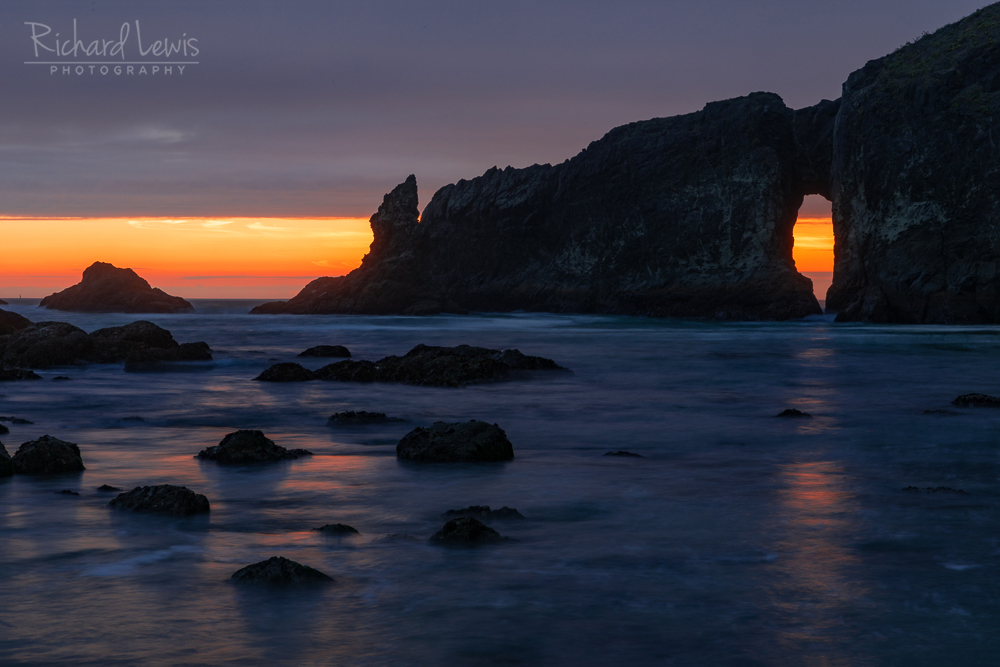 Twilight Through The Arch by Richard Lewis 2018 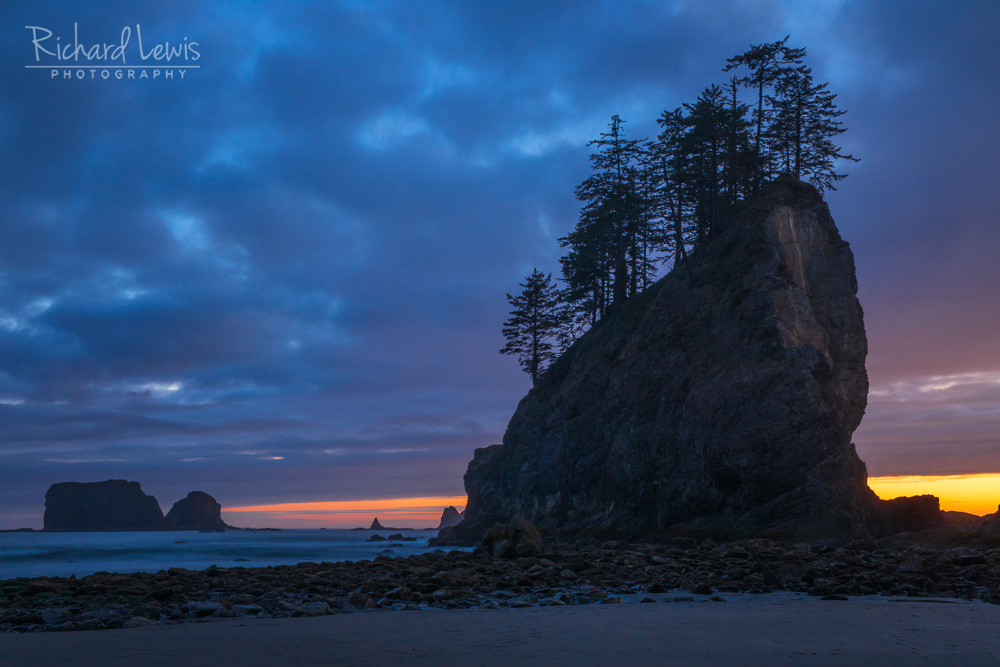 As we hiked back to the car through a dark forest with our headlamps, we felt lucky to have been there to see this amazing sunset at this beautiful beach in Olympic National Park.

Was it luck that we were on that beach for this sunset? Maybe the choice of beach was lucky. But, we also modified our original plan and added more time to this area, because we knew rain and fog would be an issue. If we stuck to that original plan, we would have left the coast and missed this beautiful sunset.

We took a break from the coastal fog one day and headed out to the Hoh Rain Forest. It rained off and on the entire time we were there, but we didn’t mind because it is a rain forest, right? The rain also produced some nice forest light. Photographing in a rainforest isn’t much different that the New Jersey Pinelands. It’s a fertile forest teaming with trees and plant life which makes it messy. Finding compositions that are pleasing means creating order within the disorder to construct a visual flow through the photograph. 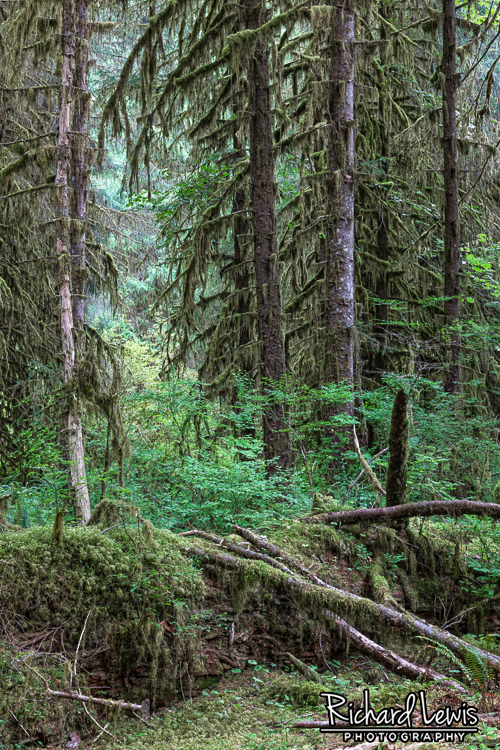 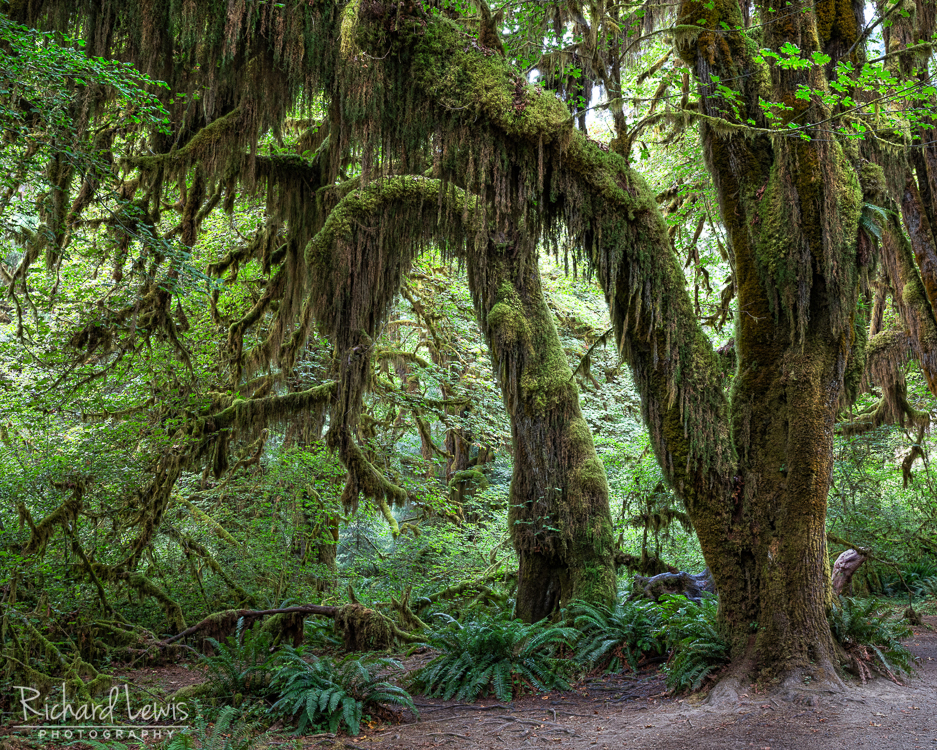 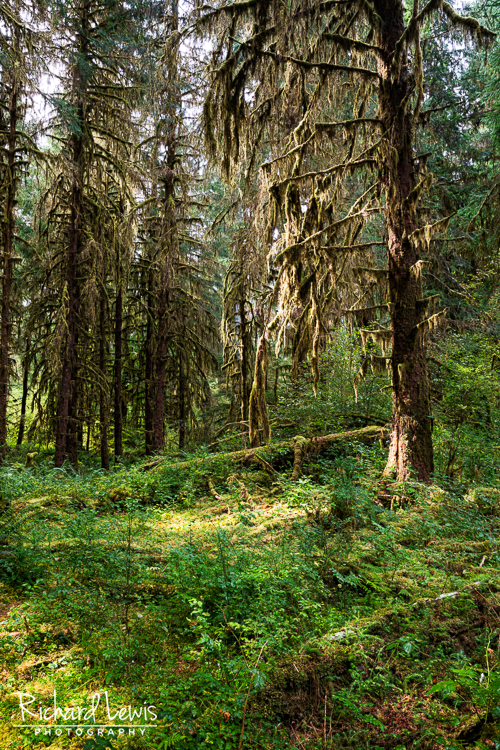 I was recently asked to share a bit about how we plan a trip like this. The answer is complicated and is now a presentation, but it’s a good question and I thought it would be nice to share some highlights. Another question I get sometimes is why not just take a photography tour or workshop. That’s great for some people and I do it from time to time. But not being with a group provides us with flexibility to go places and do what we want at our own pace. Plus, we don’t go to an area just to take pictures. Hiking and exploring are things we also enjoy when travelling. We bond with an area and its landscape which makes for better photographs.

Here are a couple of tips for planning a photography trip.

Taking the time just watch the light on the landscape is such a spiritual experience, that it drives my photography more than the conscious thoughts I have about composition and where to set the f/stop. – Me 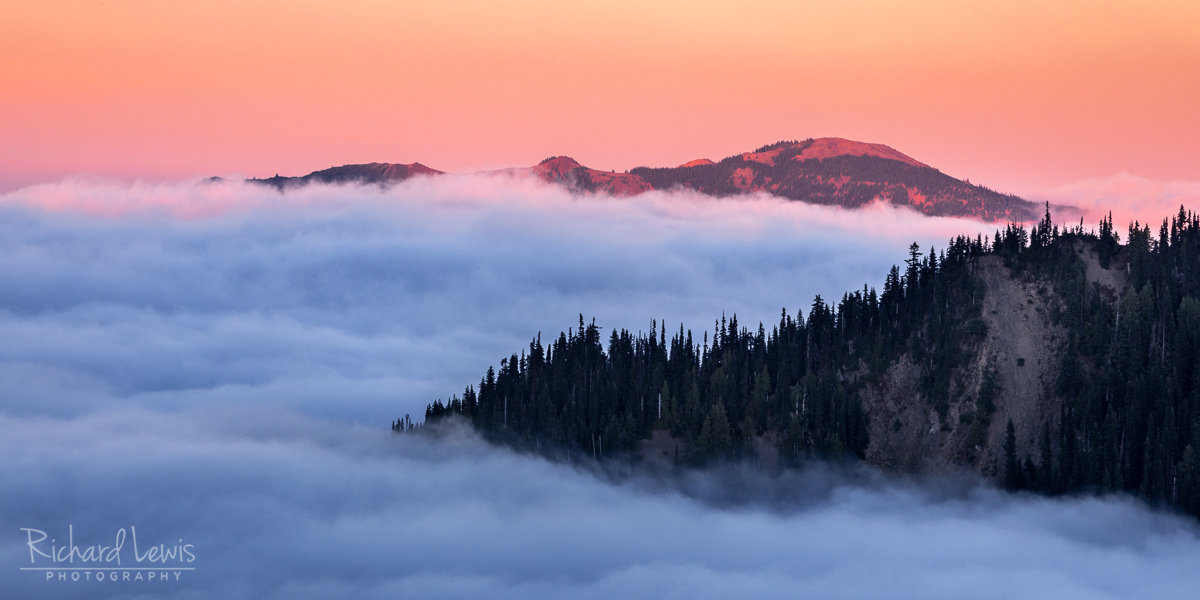