Treasure Hunting on a Hard Drive

One advantage of the Covid-19 pandemic is having the time to do things we probably would never get to. For me, one of those things was to review and organize my older photographs. That lead to the photographs below and the realization that for photographers, our passion, art, and creative voice in the form of all of our photographs, are housed in a small metal box with spinning disks inside called a hard drive. Only some of these photographs escape to be printed and framed or placed online for the world to see leaving a treasure trove of potentially great photography that was overlooked or even forgotten.

While diving deep into the recesses of those spinning disks, my attention was randomly drawn the year 2013. I decided to revisit and rethink some of my work from that year. It was an interesting experiment and here are the results. These photographs were either reprocessed using skills and software that I didn’t have in 2013 or were images that I overlooked because my creative voice has grown and matured.

Ricketts Glen State Park in Pennsylvania has 21 named waterfalls and even more unnamed smaller falls. If you look at my original blog post, you’ll see what impressed me about the place in 2013. The following photograph is the 2020 version followed by the original below it. The composition is a little tighter and it is processed in color instead of black and white like the original. Color impacts the visual flow differently when compared to the original black and white shown below. 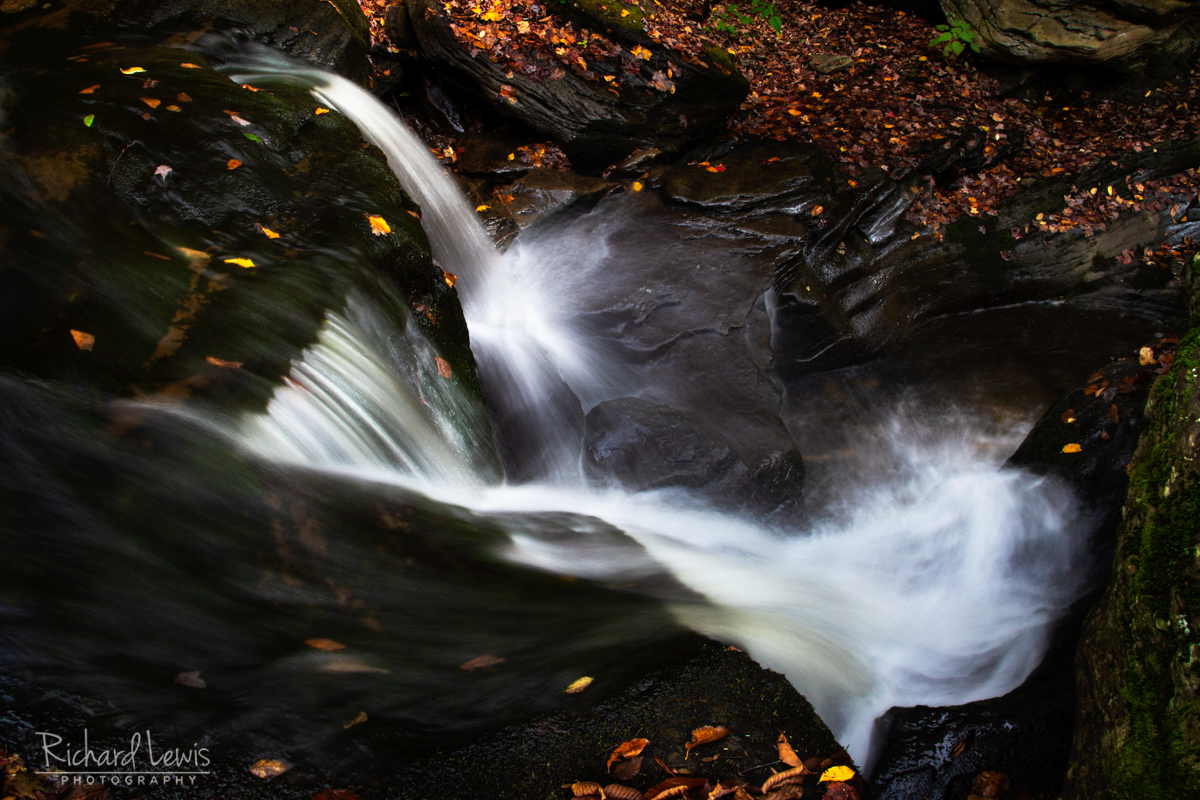 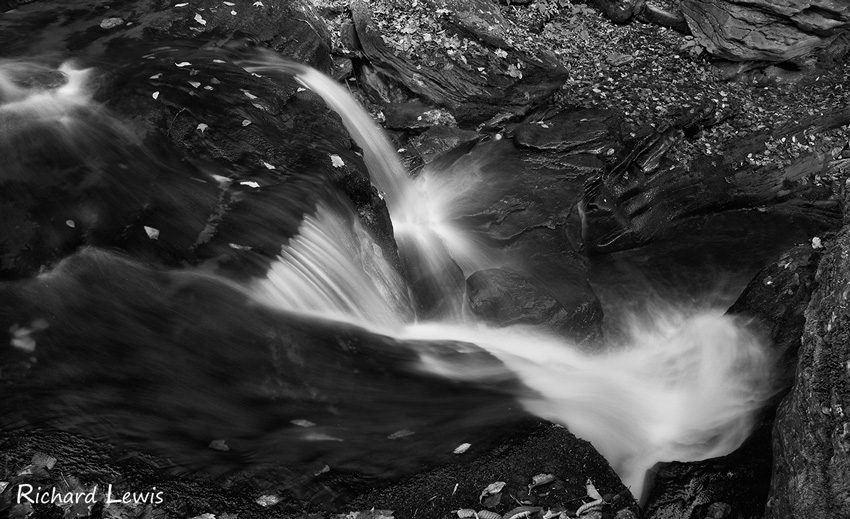 The following two photographs were overlooked in the original selection. The composition of this tiny waterfall and the sense of place in the larger one didn’t stand out in 2013. Now these are two of my favorites of that day. Both show the force and power of nature on a small and large scale. The gorges of Ricketts Glen are not really about 21 iconic waterfalls. They are about the power of water on the landscape it flows through. 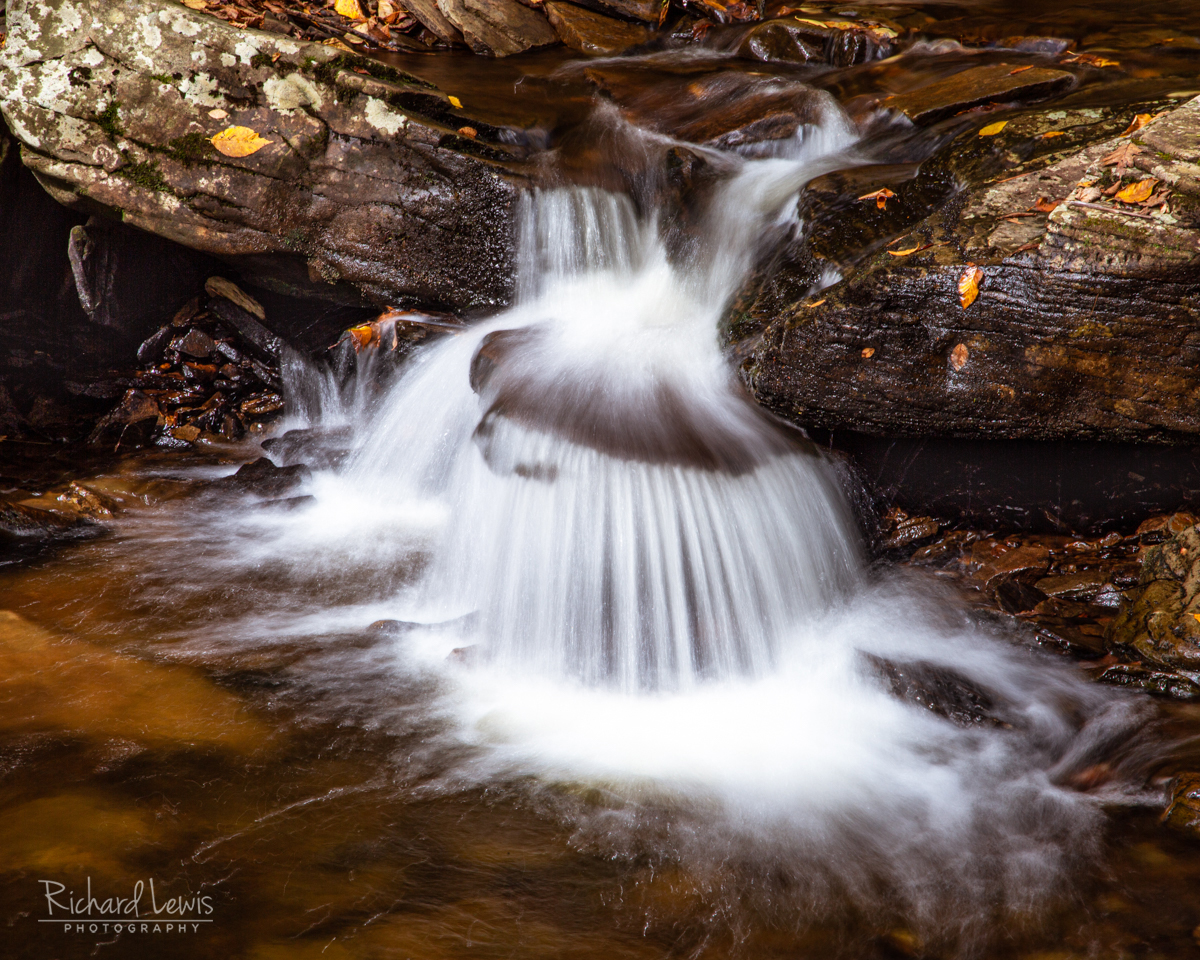 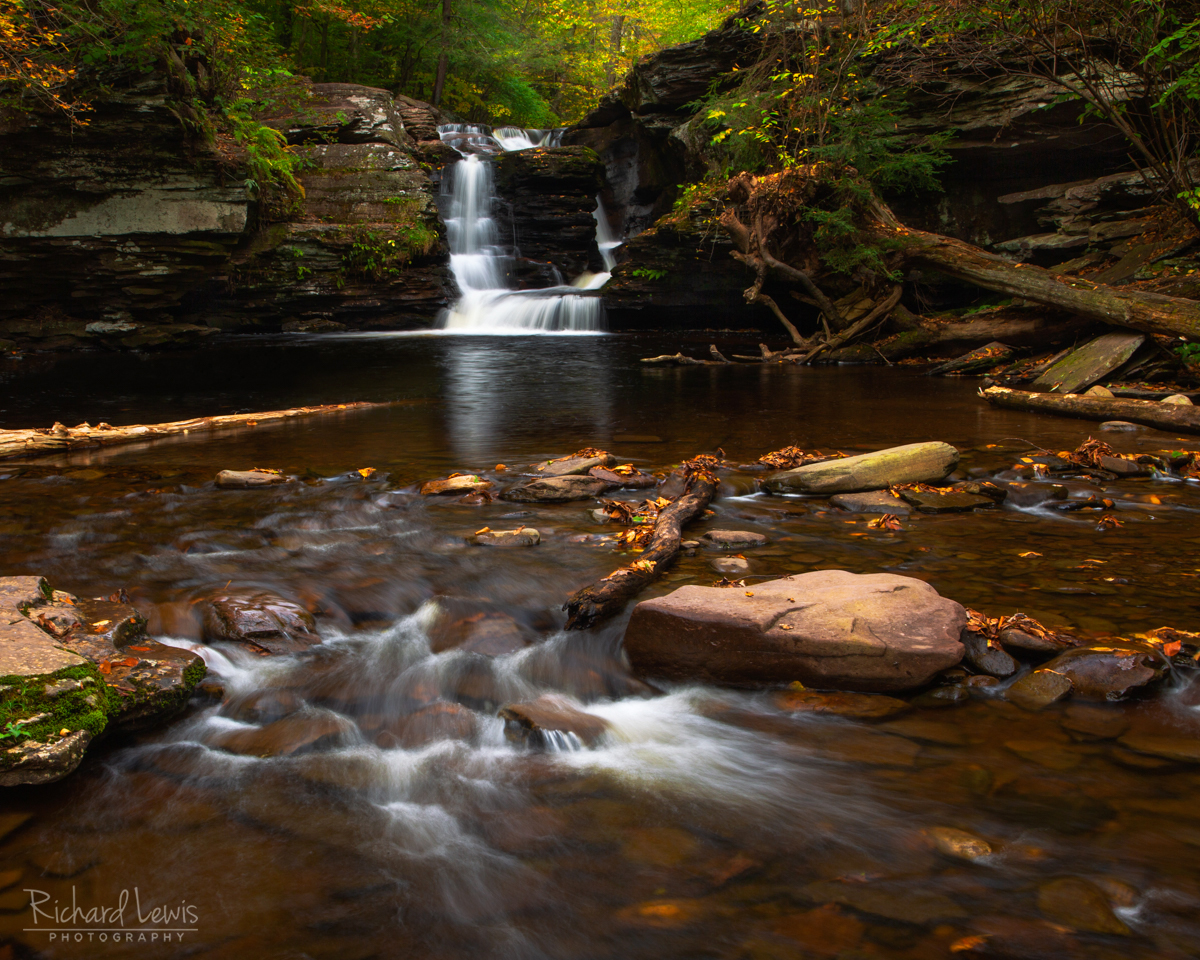 This image is from the Delaware Water Gap, another place known for its waterfalls, among other things. The abstract nature of this composition looking down on a waterfall probably didn’t intrigue me in 2013. Now, I’m wondering how I overlooked it. 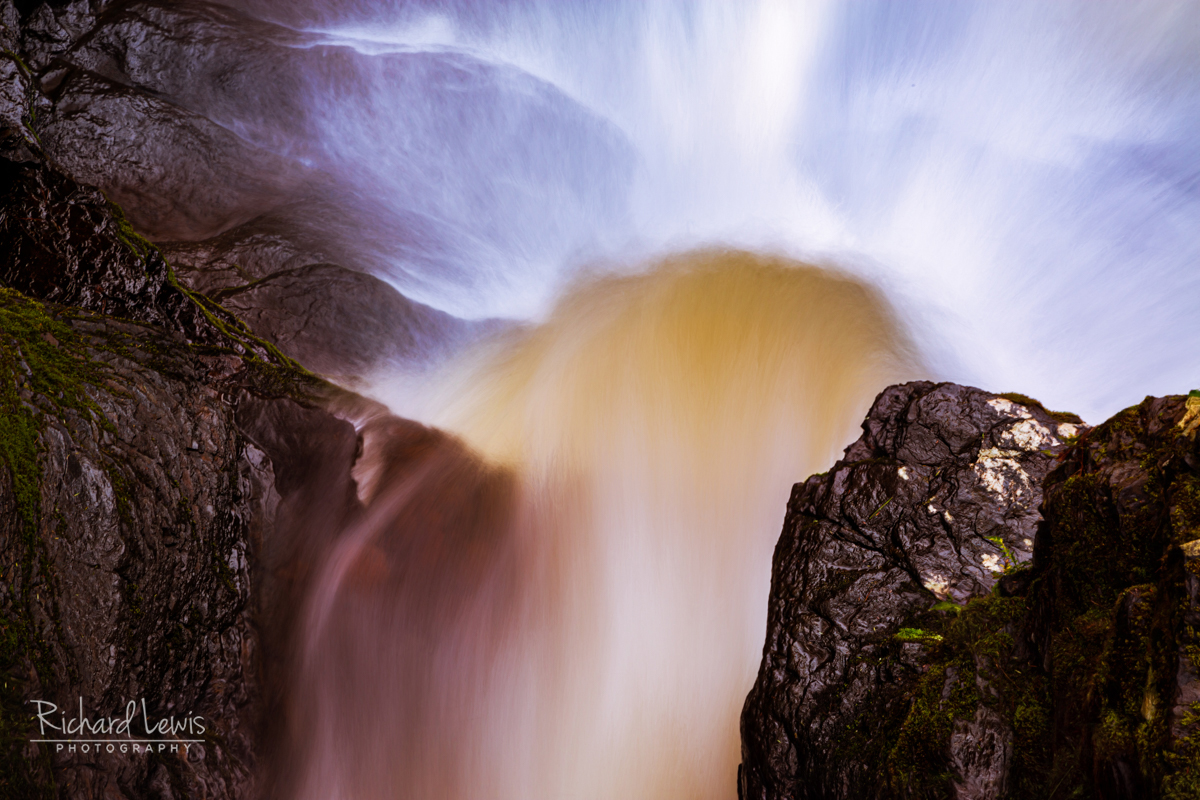 The rugged landscape, not far outside of New York City, in Harriman and Bear Mountain State Parks has attracted my attention for a long time. Back in 2013 I tended to only photograph the natural landscape without a human element, so it was surprising to find this one. It never made it into my original blog post, but it’s now one of my favorite images of the year. In this scene reflections and contrasting colors create an almost abstract symmetry. Does this symbolize how human interaction shapes nature? 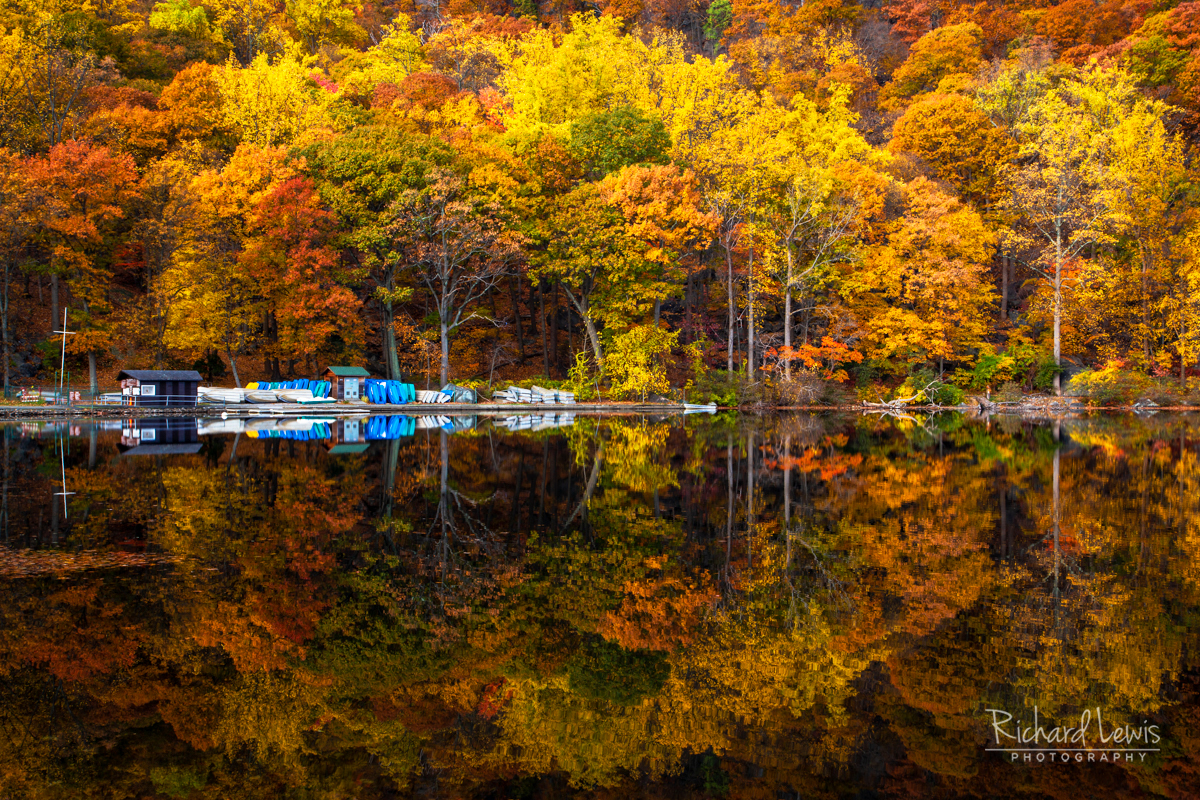 Iona Island along the Hudson River is an interesting place. Surrounded by what could be considered the more scenic mountains of Harriman and Bear Mountain State Parks, this island is mostly flat marshland. Yet it is full of textures and color. 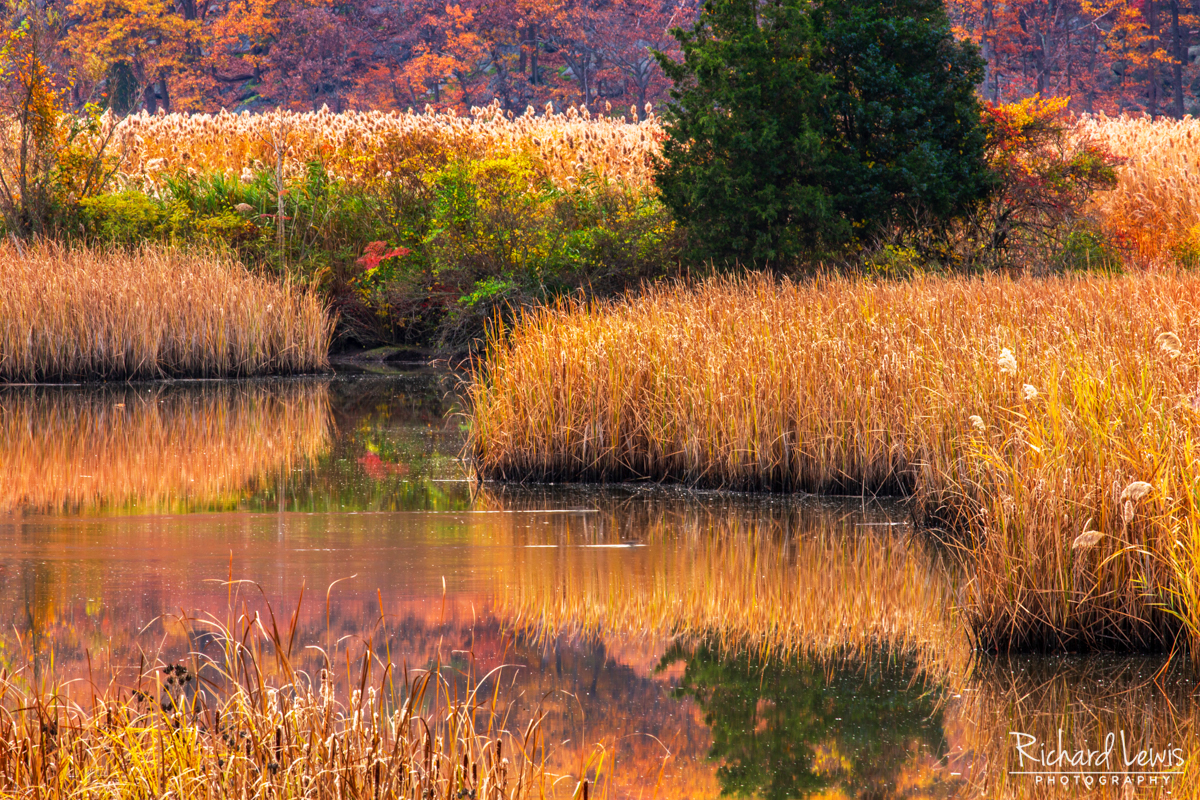 We took a hike to photograph the fall colors along a favorite creek only to find that the dry conditions reduced the creek to a trickle. When we returned to the parking area we discovered this exceptional little fall tree. It was almost as if the park was apologizing for the lack of water. My original composition (second photograph) was a combination of several exposures from slow to fast shutter speeds. The idea was to create an impressionistic effect by combining sharply focused and motion blurred leaves. The image directly below includes a red leaved tree. It is also a single exposure with a 1/15th second shutter speed that creates just a hint of movement in the leaves. The shadows are also darkened to bring out more of the forest light I remember seeing that day. So which one do you like better? Leave a comment below. 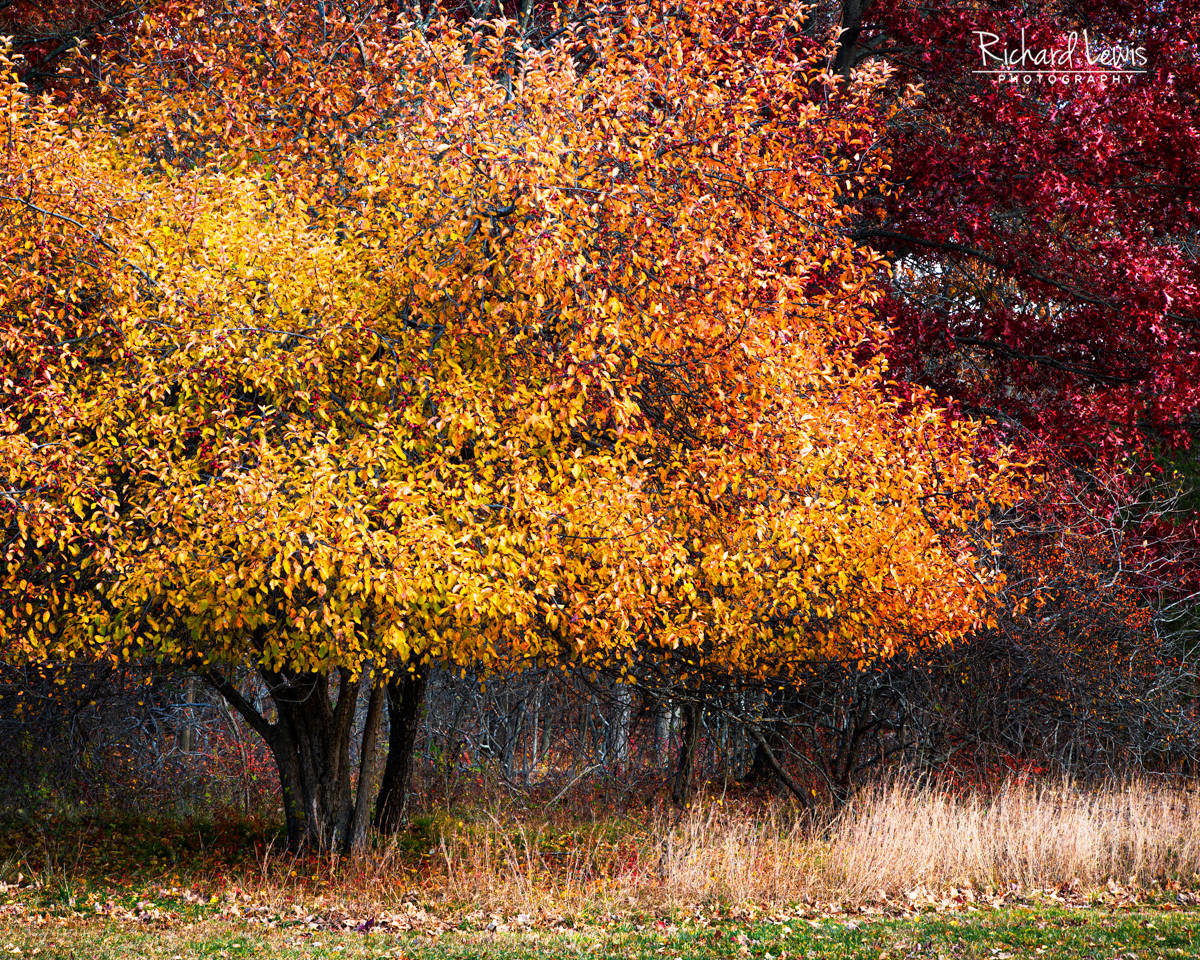 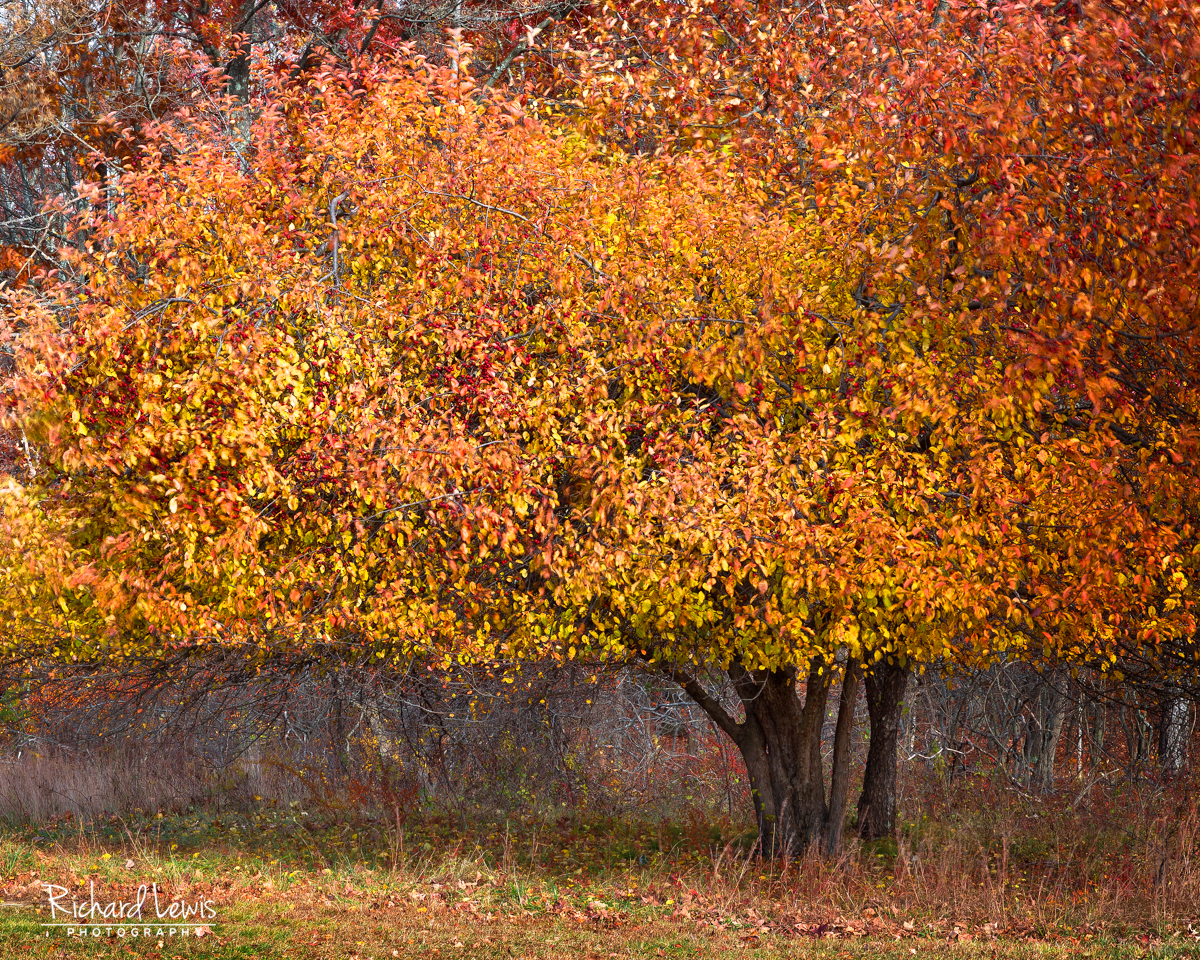 The Pine Barrens are home and if there is anywhere a landscape photographer’s unique creative voice is strongest, it will be in the familiar places close to home. The photograph below is one of my favorites of all time. It’s a panorama combined from several photographs. It was one of those times where you just knew there was something good on the camera’s card after you made the image, or in this case images.

Even though I had the shot, I kept going as the sun started to break through the mist and fog and light the landscape. This image, made a few minutes later, didn’t catch my eye in 2013. Noticing the touch of subtle morning light and color on a minimalistic scene finally won me over. 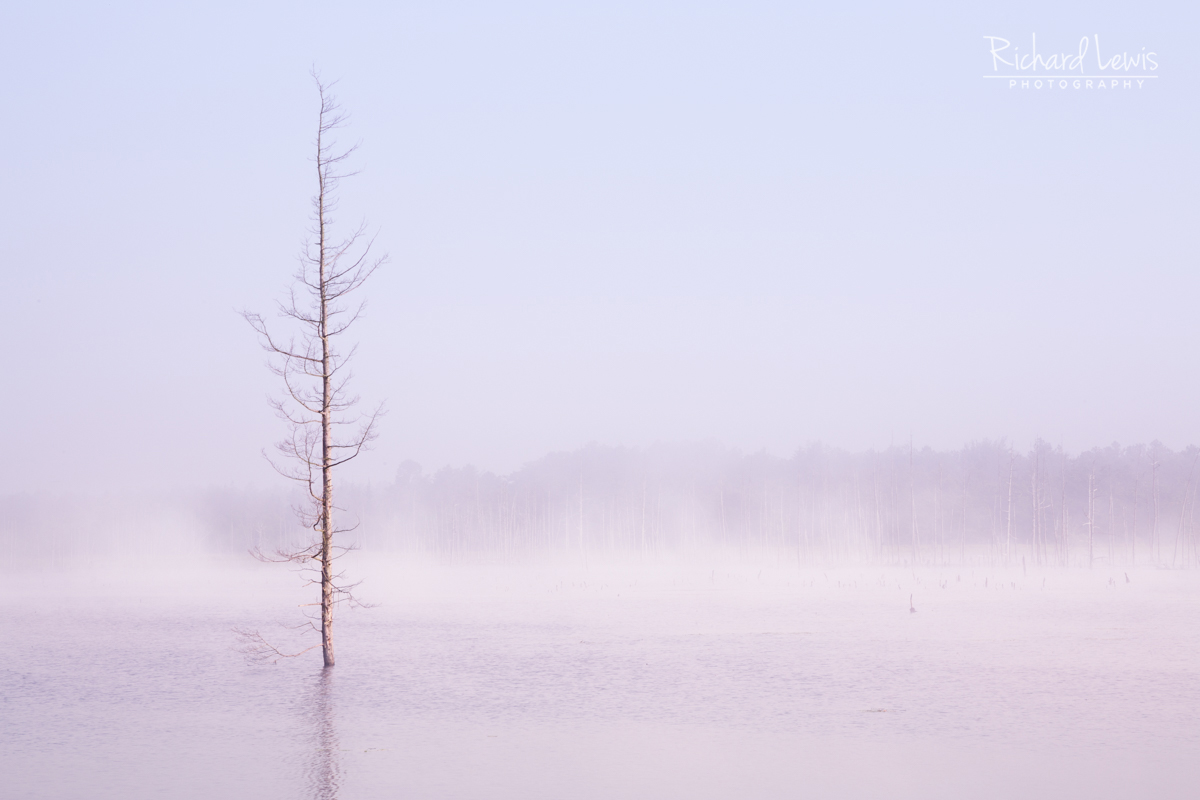 This view is one of my favorite scenes in the Franklin Parker Preserve. It tends to look better than it photographs because it is an awkward composition. Here the pastel colored pre-dawn sky fills the gap between the stands of trees along the shoreline and joins the scene together. 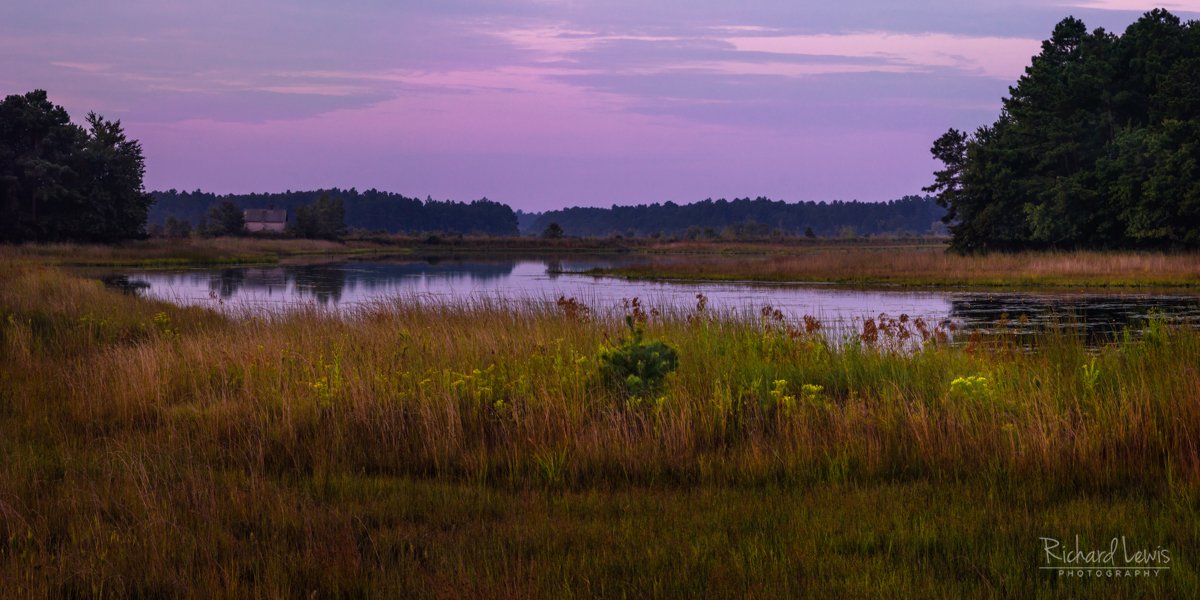 Our first visit to Death Valley was in 2013. A National Park like Death Valley is loaded with iconic shots, but I wanted find my own space in this popular and photogenic park. The image below is the Racetrack Playa which is known for rocks that move leaving trails in the dried mud. They are really fun objects to photograph, but this distant view of the Racetrack glowing in the twilight was far more appealing to me. This image is a slightly different composition and reprocessed to bring out the cool quiet as night falls on a winter desert. 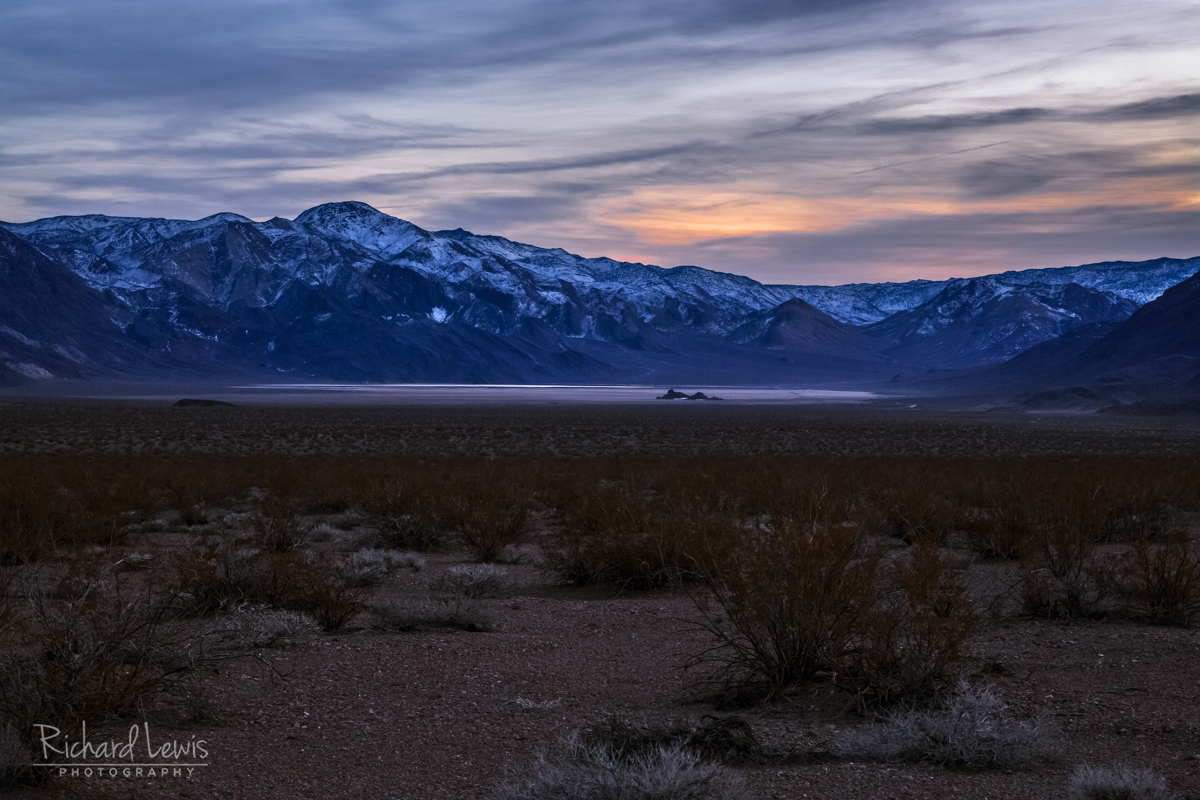 A very popular place to photograph sunrise in the Death Valley badlands is Zabriskie Point. When I drove by it two hours before sunrise and the parking lot was full, I decided to skip fighting for tripod space there and moved on. A few miles away I hiked up a canyon it to find this unique place to experience the desert morning and be alone with the landscape. 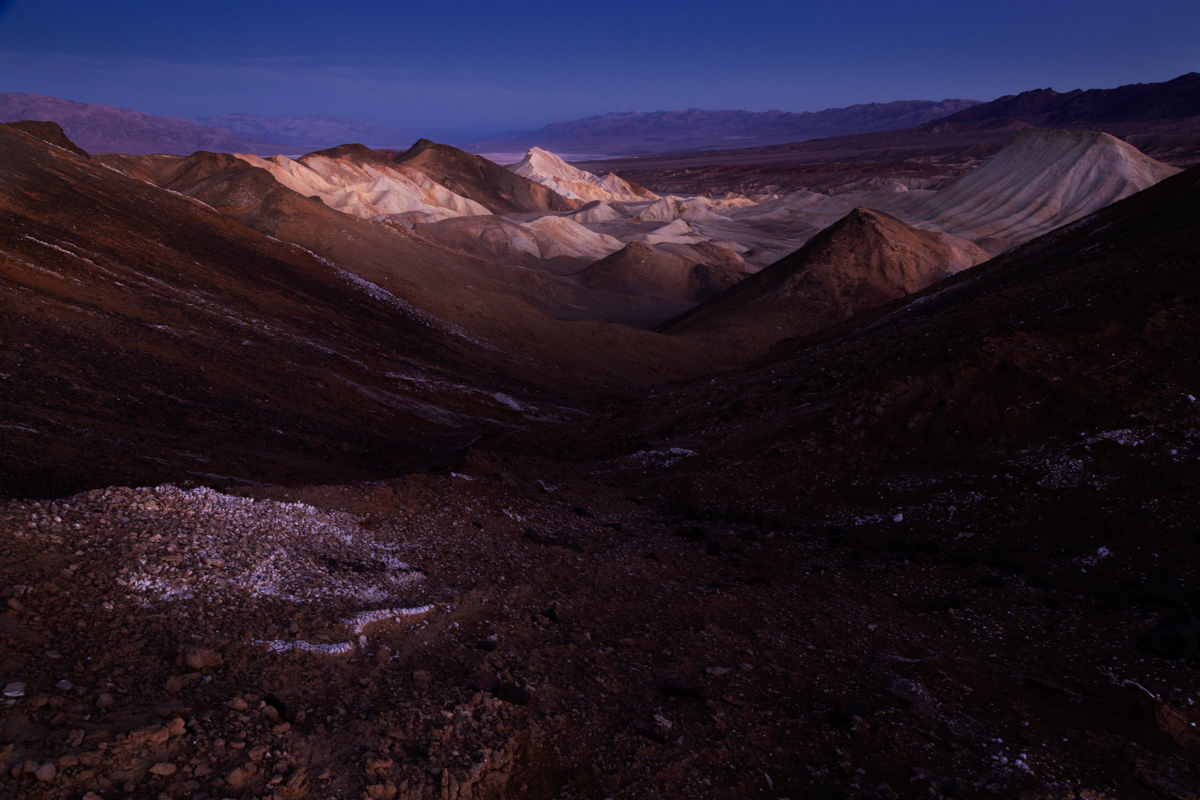 In 2013 while at a family event in Colorado, we managed to slip away to Rocky Mountain National Park. Twilight seems to be the theme of this part of 2013’s rediscovery. Here, the landscape above Estes Park glows in the blue hour twilight lit by a full moon. 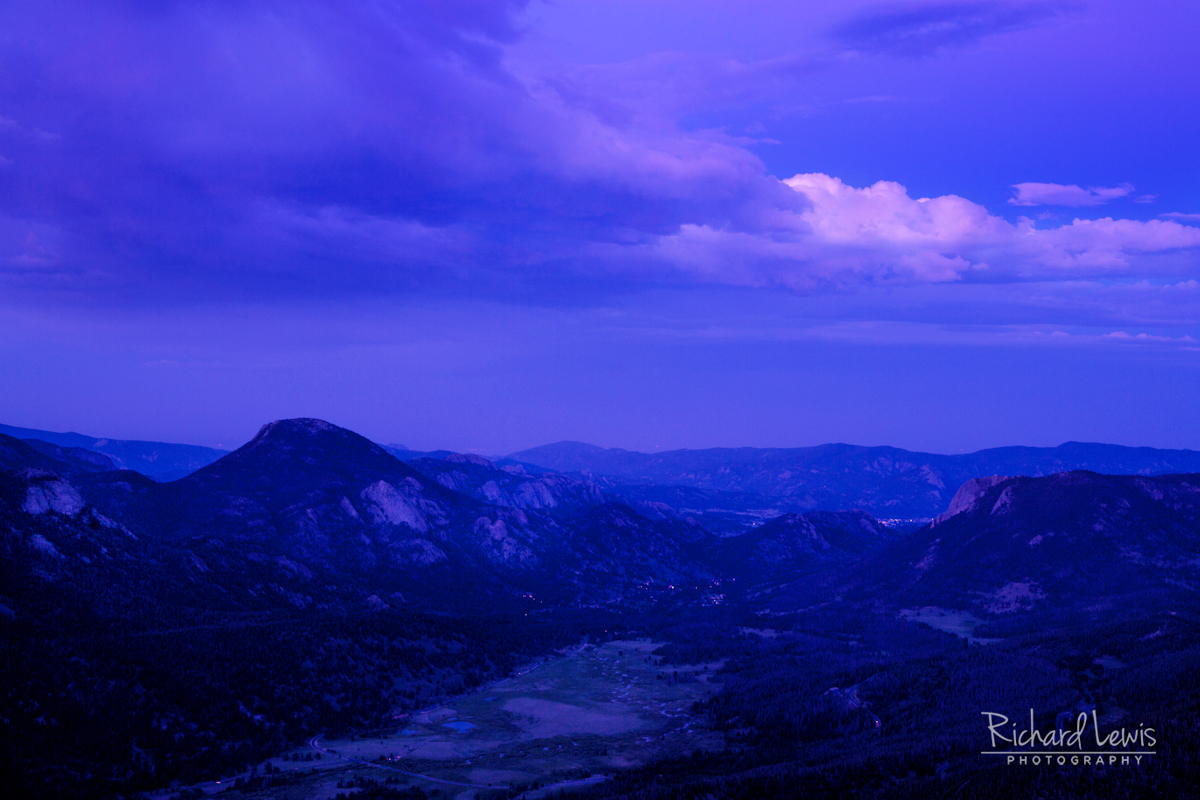 I hope you enjoyed this little romp through 2013. Try conducting your own treasure hunt through that magic box called a hard drive and take a fresh look at your older images You just might find some hidden gems. You can also compare the difference between your photography and post processing skills from the past to the present. This will help you measure your growth as a photographer.

See more of my photography here!