If I ever write an autobiography, it will be titled Seduced by the Light. Light, and its effect on the landscape, has fascinated me since I was a kid. Taking up photography has been a way to express that fascination. As landscape photographers we chase light and and tend to go for the cherished golden hour light of sunrise and sunset. It’s very lovely light, but by chasing it are we also limiting the creativity in our landscape photography?

The Pine Barrens, where I live are a challenging and sometimes difficult landscape to photograph. That challenge forces you to not just use the light, but harness it to bring out the beauty of this flat, often rugged landscape. The skills we develop in the Pine Barrens make it so much easier to shoot other, not so challenging landscapes, or what I call point and shoot landscapes like the one below. 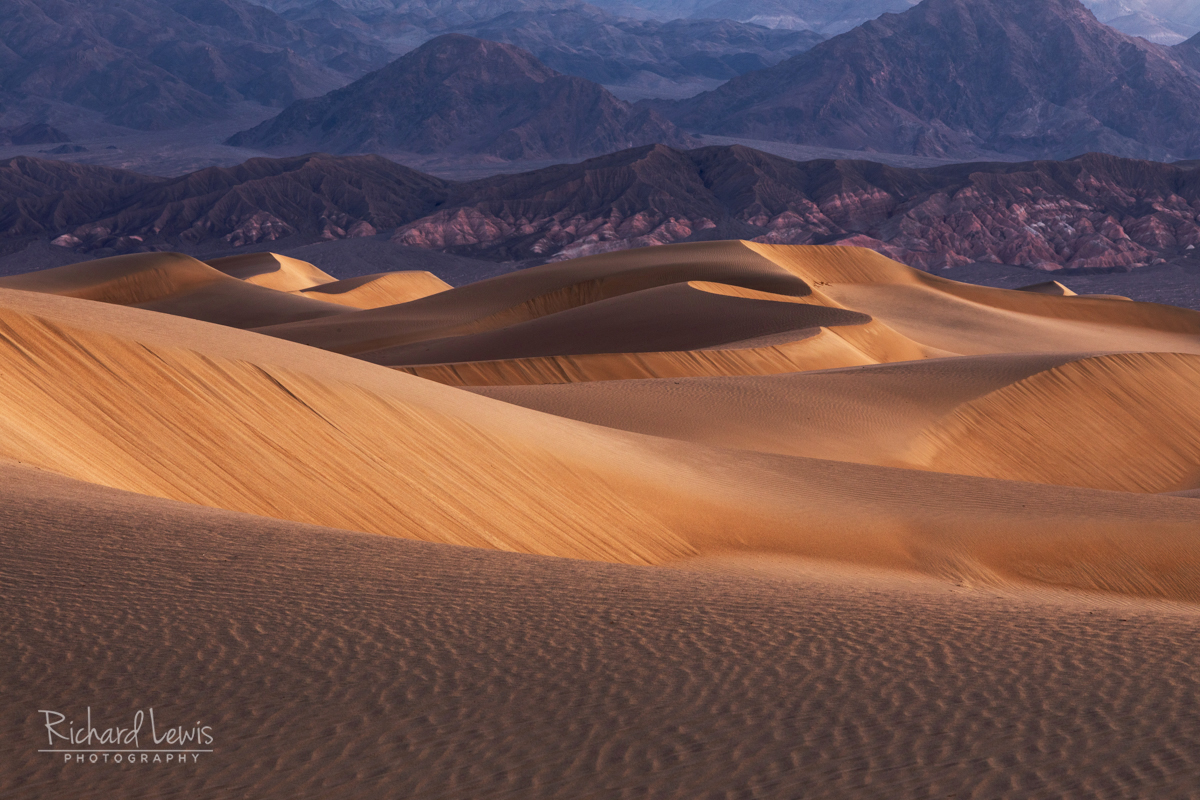 There is a shortcut to photographing our challenging Pine Barrens landscape… Sky Drama. Not that a dramatic sky isn’t a gift, it is. But when the land in your landscape is a nothing but horizontal sliver across the photograph, what exactly are you photographing? The sky or the Pine Barrens? In art there is a concept called Figure and Ground. The idea is that the Figure is your subject and the Ground is the surface you put the figure on, or in photography, the support or background.

Sky Drama isn’t bad, but it is also a crutch. Around here photographers can fall victim to this crutch because it makes a hard job easier. Like any crutch, you can become dependent on it. In this case it limits your ability to see and fully connect with the landscape you are photographing. 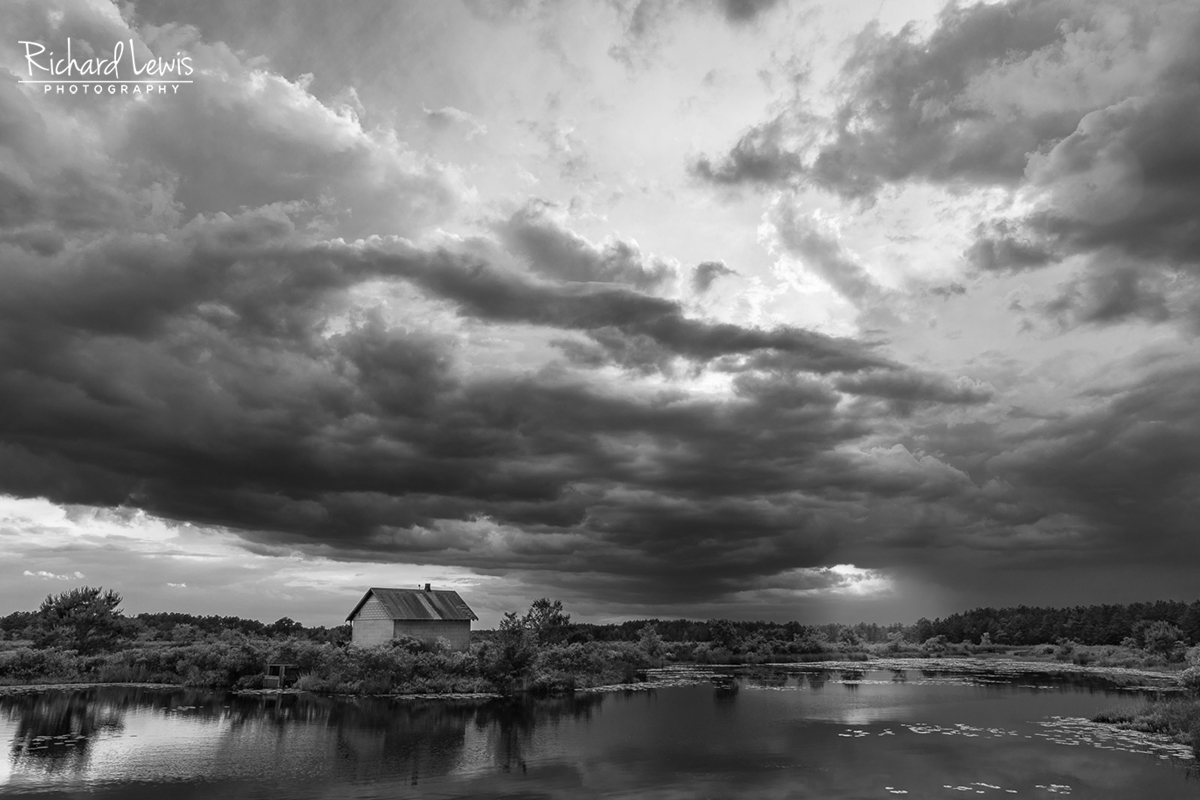 The Coming Storm by Richard Lewis 2018 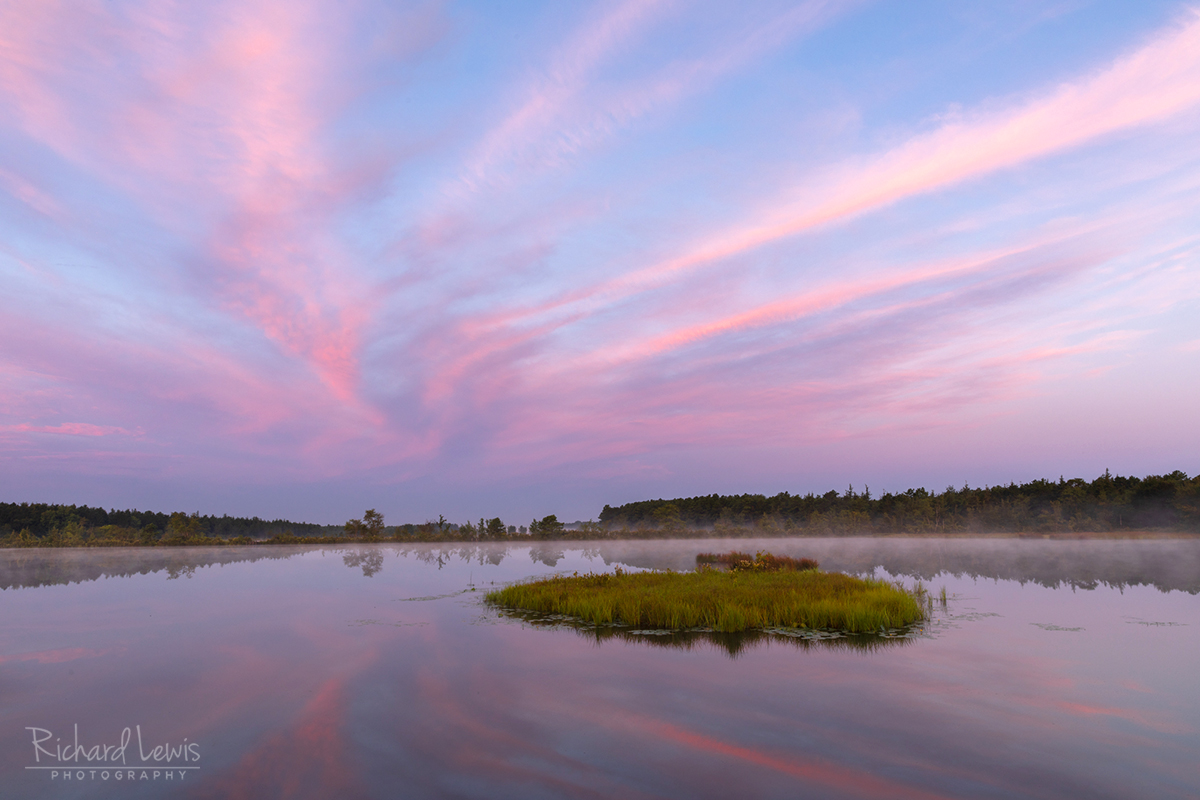 In the above photographs the subject, or figure speaking artistically, is the sky. The Pine Barrens plays a supporting role and could be just about any pine forest located near water. Photographing this way limits what and when you photograph and it can also make all your photographs look the same.

In the photographs below, the sky drama sets the mood of the photograph, but doesn’t dominate the landscape. It plays the supporting role. In artistic terms, the Pine Barrens is the Figure and the sky is the Ground. The reason for this role reversal is that the landscape is closer and the composition is built around the landscape and not the sky. 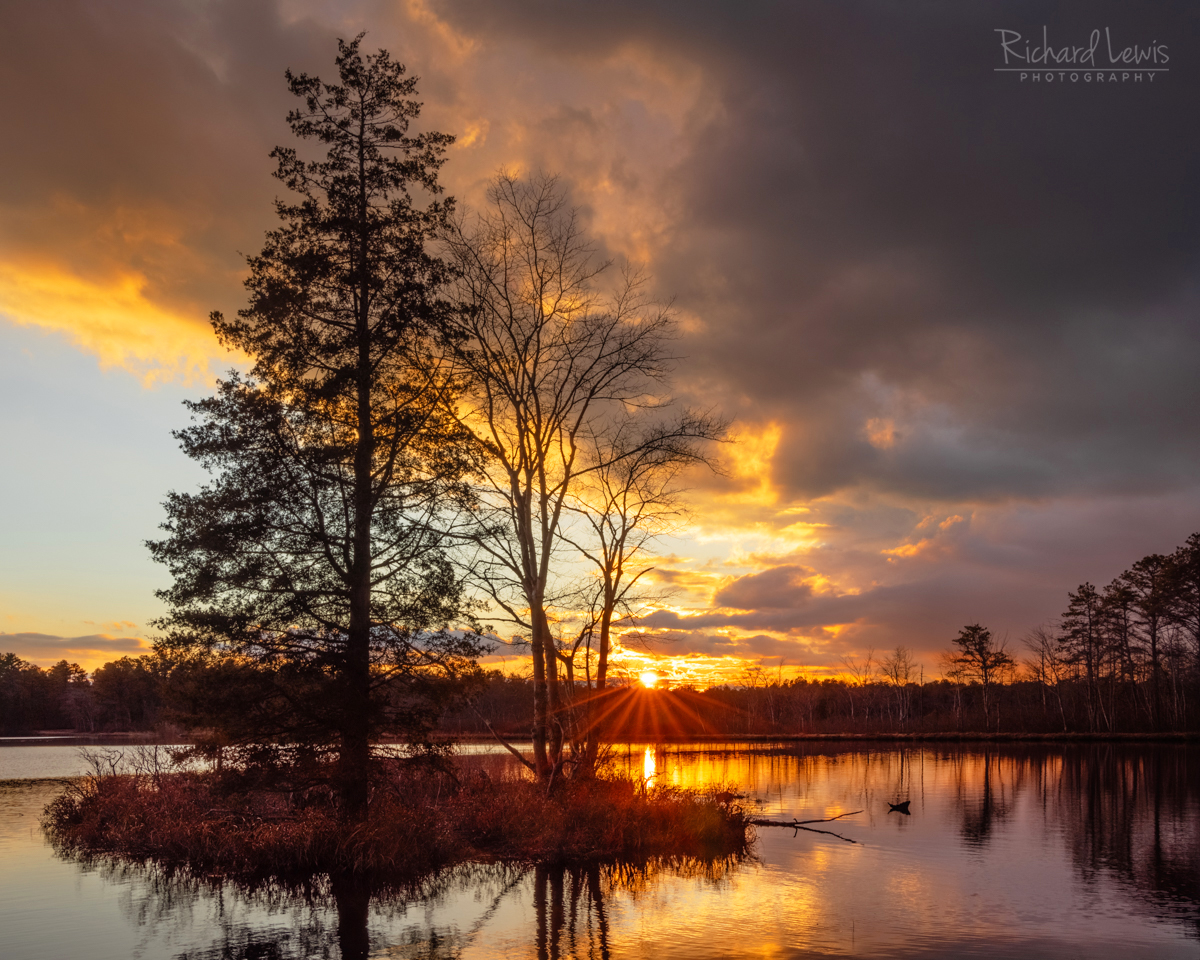 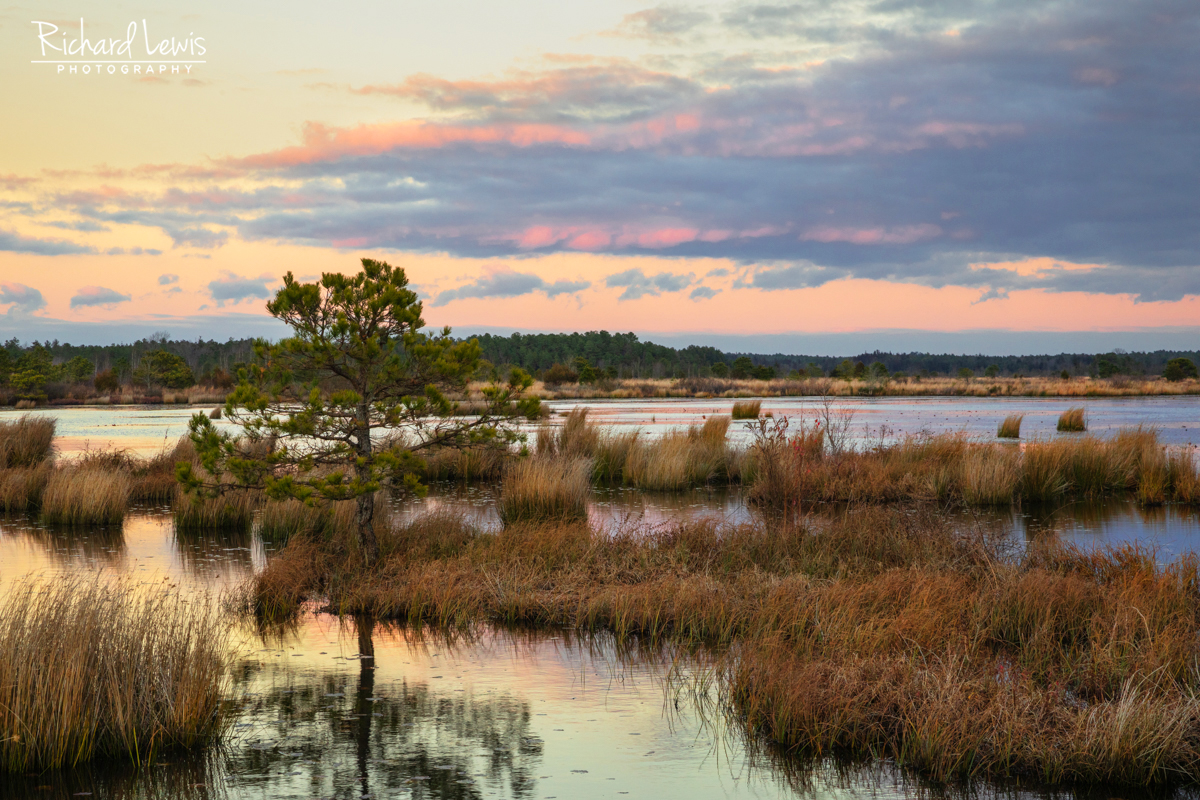 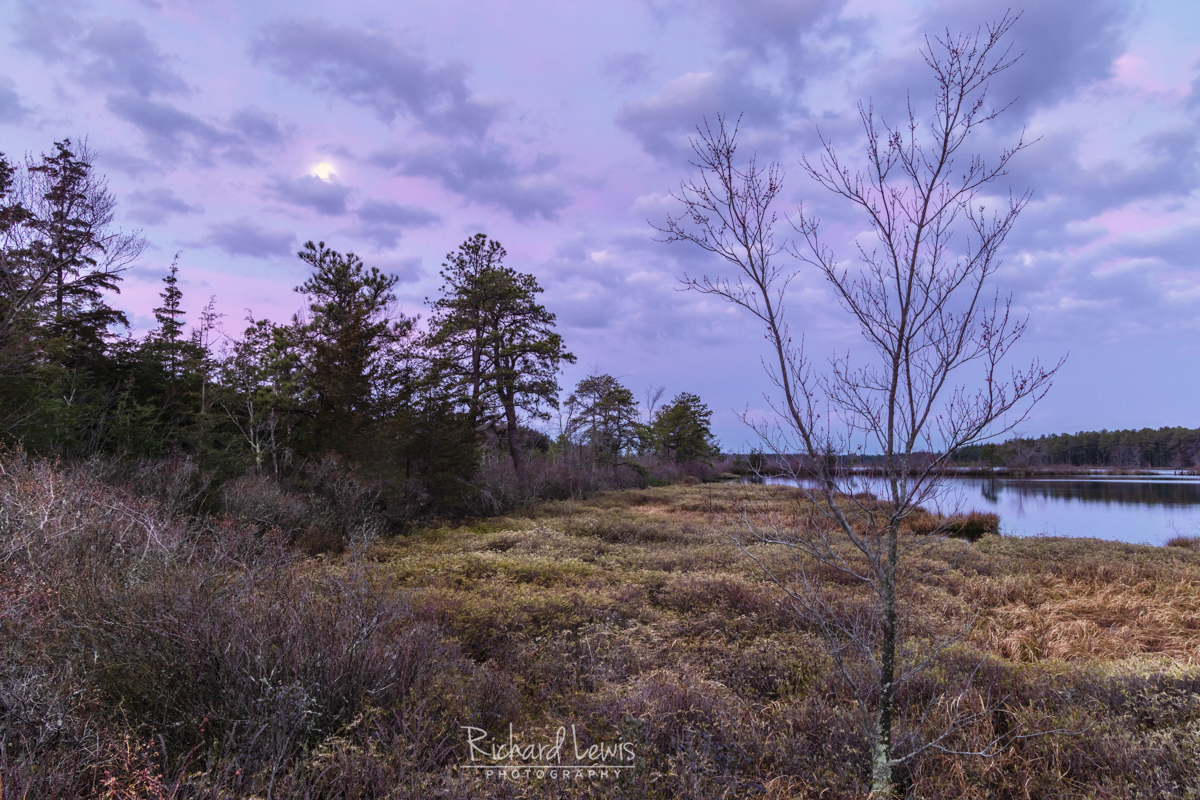 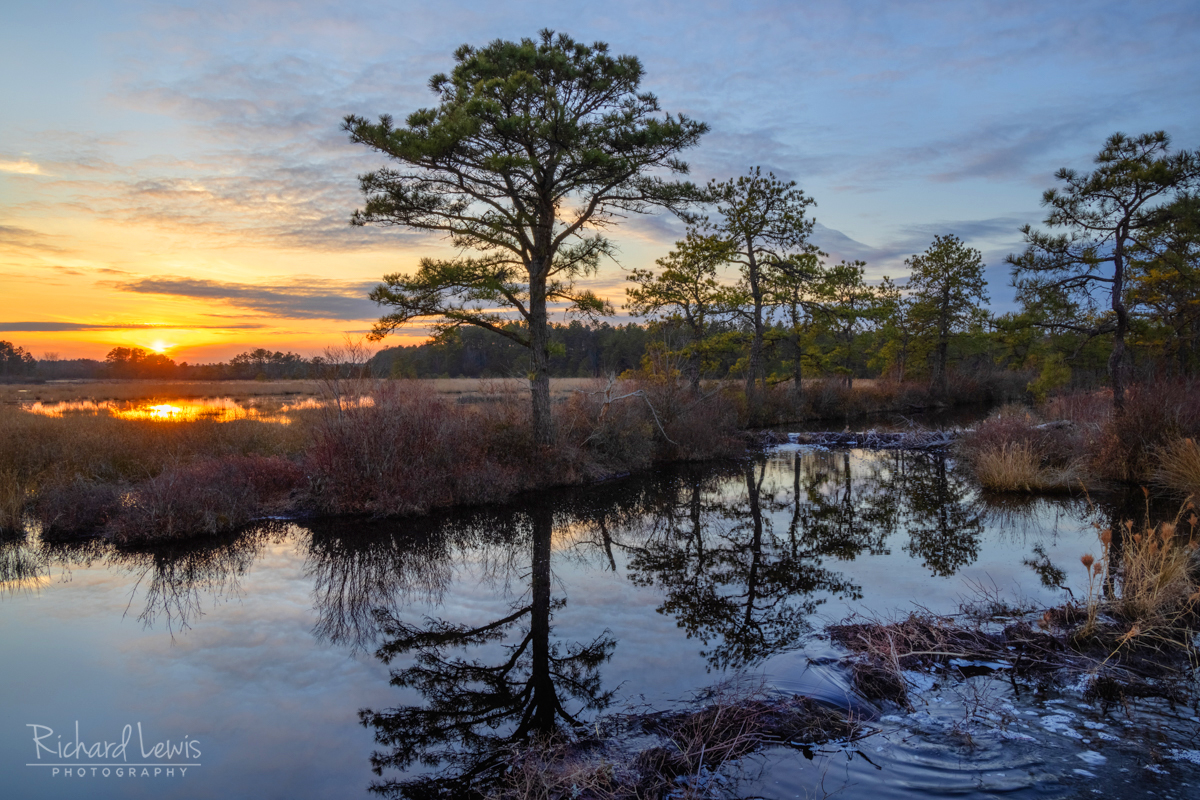 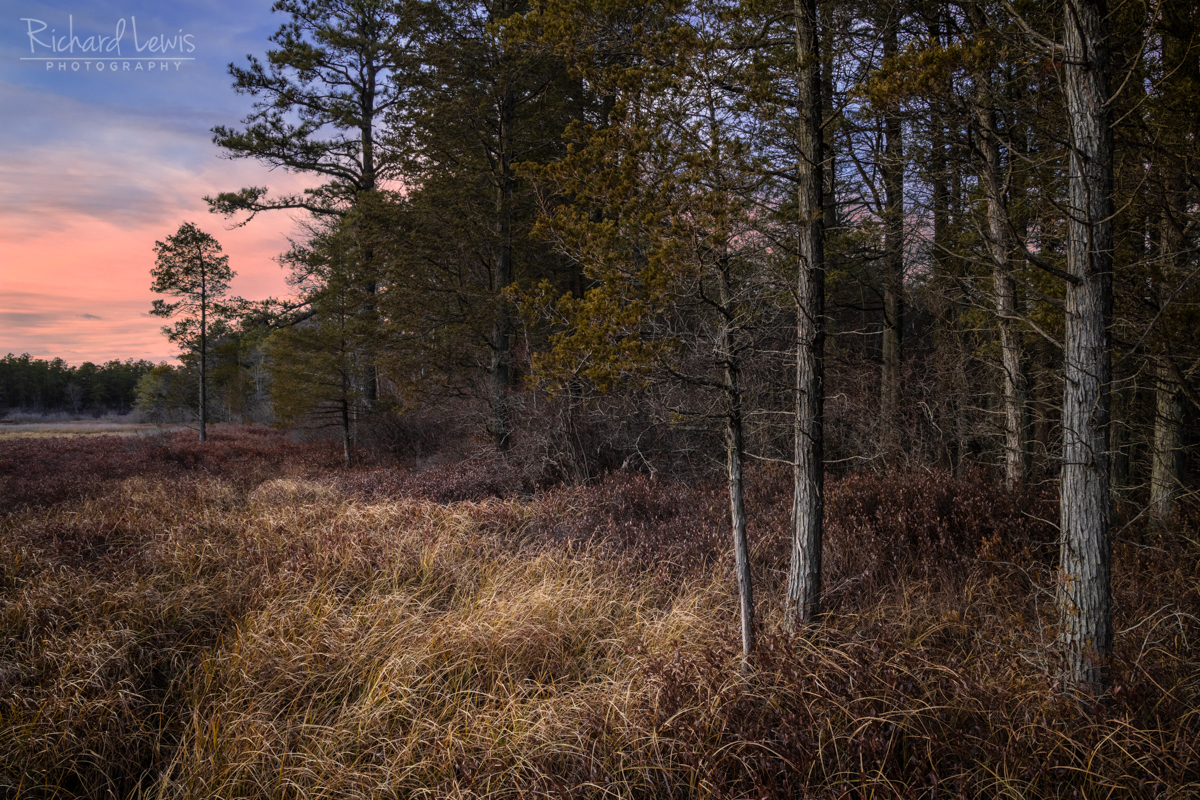 In the above photograph, the pink twilight sky was purposely relegated to play a very minor role. Believe me, it was a hard decision to avoid turning the camera to the left and including more of the sky over the open marsh.

When you shoot sky drama on a regular basis, you tend to start comparing the days. “There is going to be a great sunrise, but will it be more epic than last week?” is something that runs through my head every morning when I stand on my porch deciding whether to go out. Leaning too hard on the drama, even as a support, can make you miss the best things in the natural world you are photographing. So, why not just ignore the sky all together? Photographing how the light effects the landscape, let’s call that Landscape Drama, opens up many possibilities to photograph beyond the golden. hours and the presence of sky drama. In the photographs below, the sky was cloudless with virtually no drama, but look how the light interacts with the landscape. 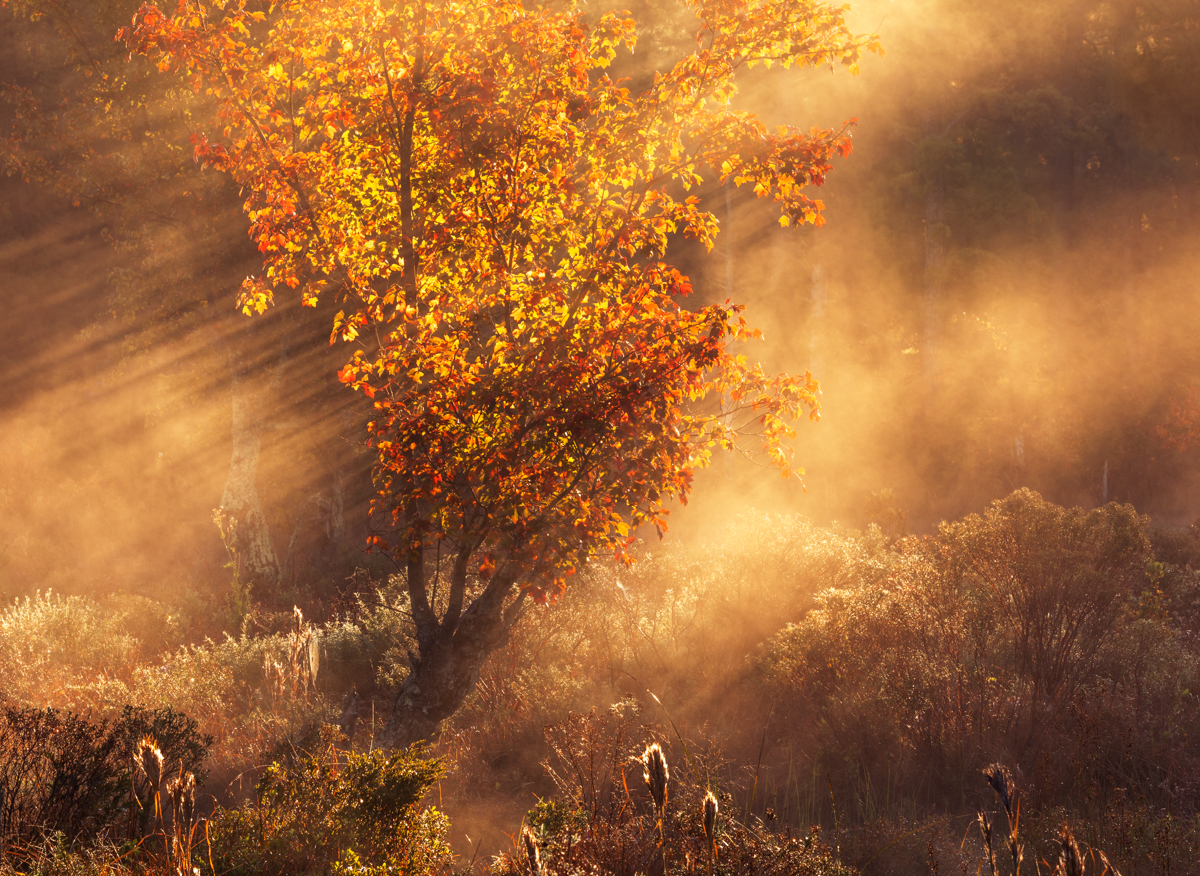 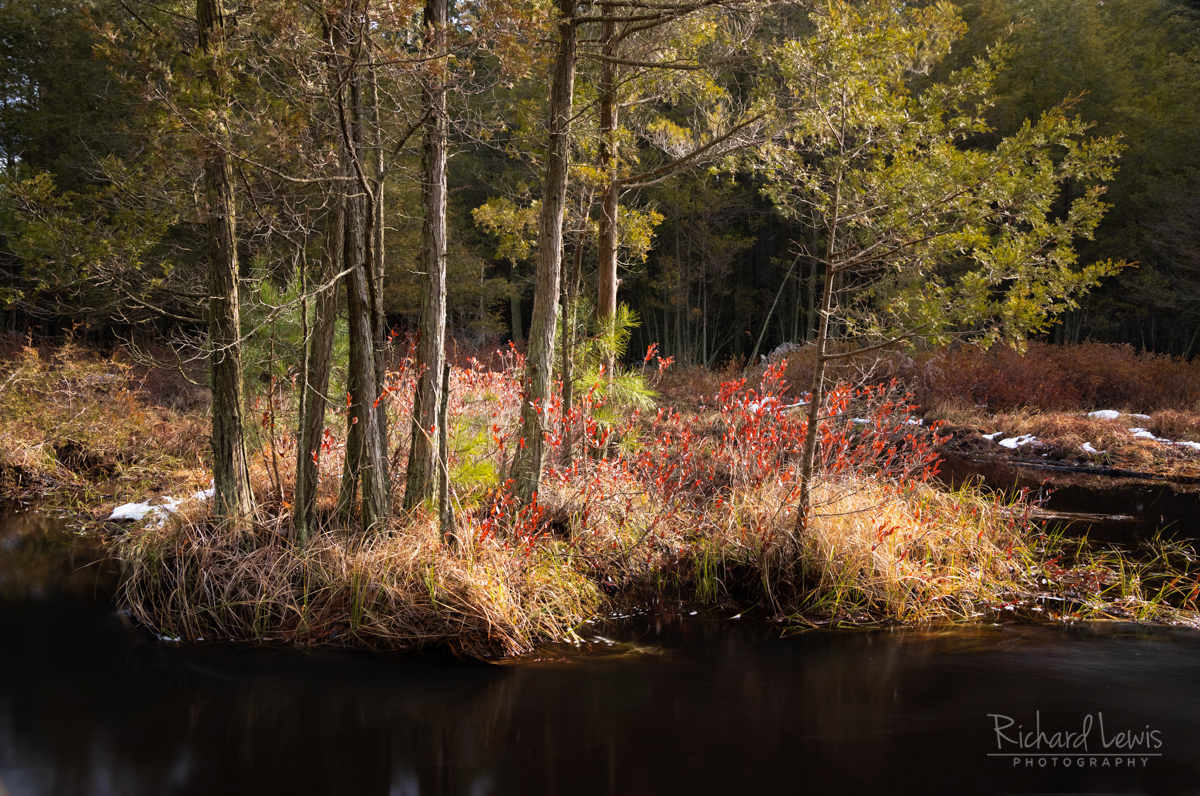 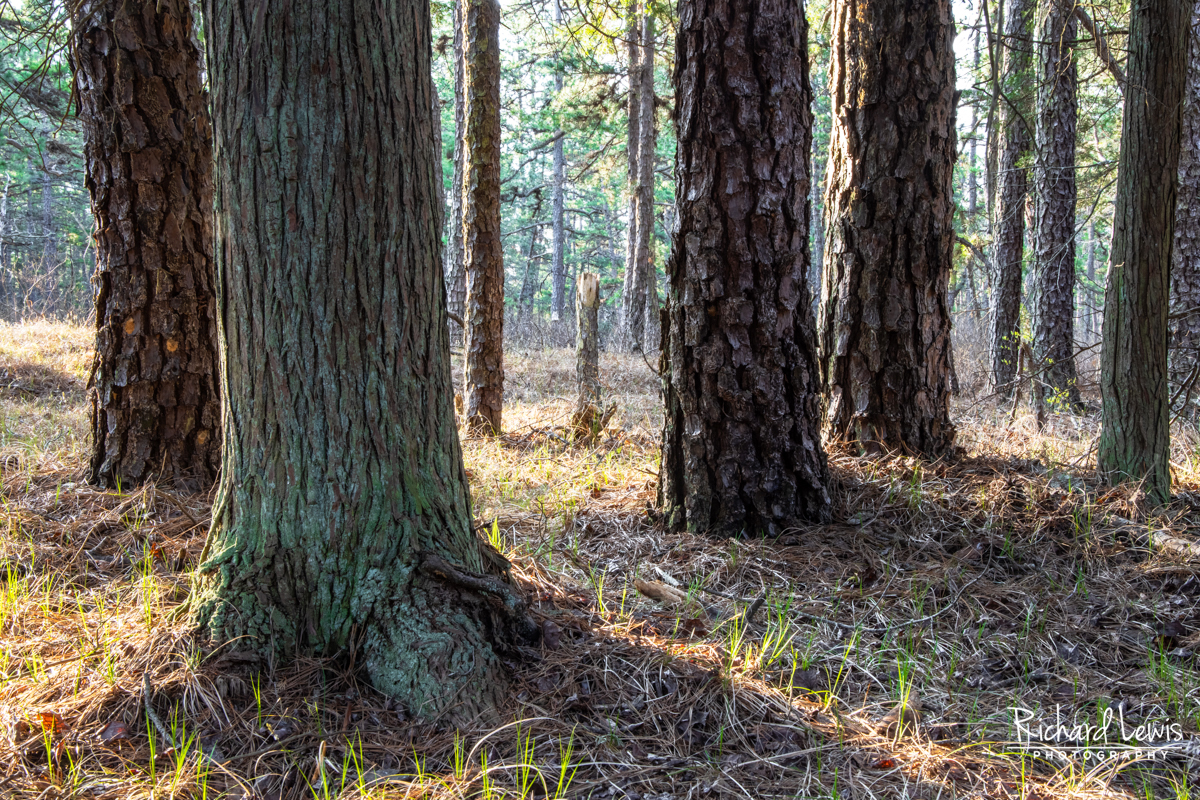 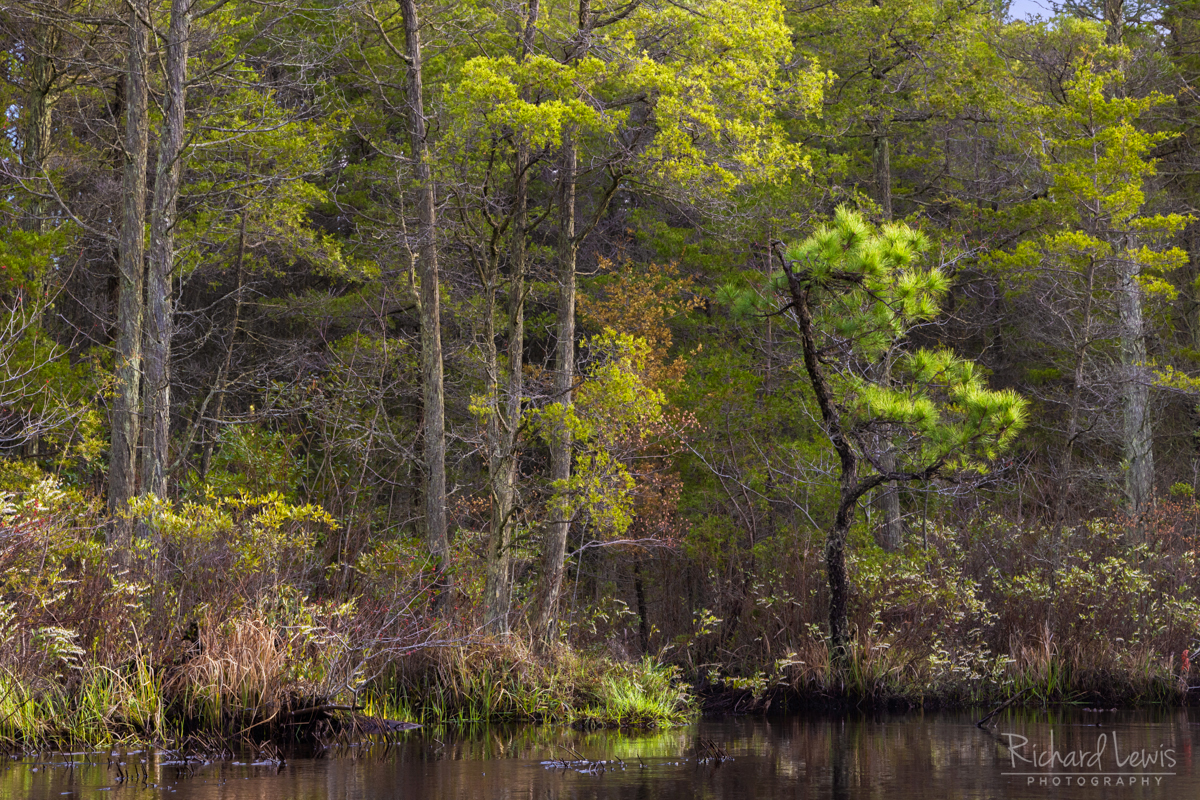 Morning On The Oswego River by Richard Lewis 2021

The Story Of One Morning

Recently my friend Rob and I went out to photograph what we hoped would be an epic sunrise and we got more than we bargained for. Nature threw everything at us that morning. Gorgeous sky color from from first light to way past sunrise. Even a rainbow showed up. However the best thing I walked away with was the epiphany that lead to this blog post. We arrived at the location about 30 minutes before sunrise and were greeted with this beautiful pink twilight. 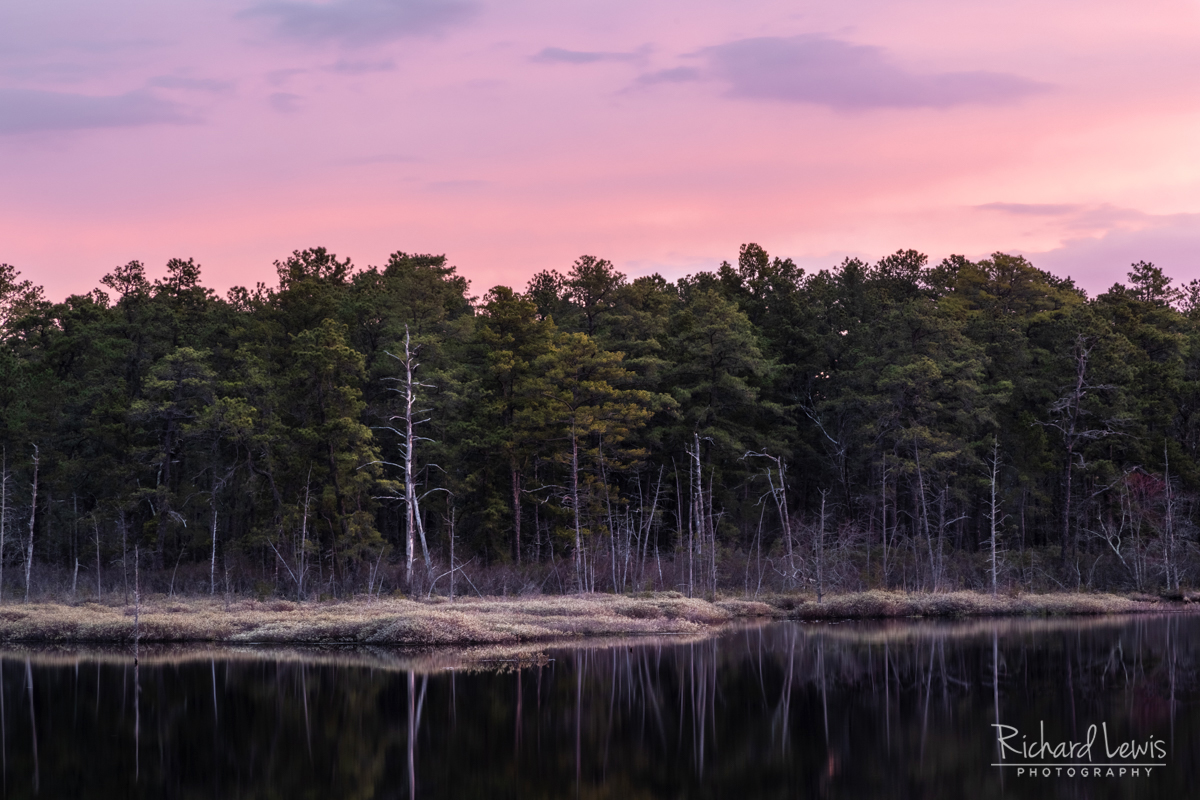 Twilight Across The Bog by Richard Lewis 2021

I kept seeing something out of the corner of my eye and decided not to ignore it. To our surprise it was a double rainbow caused by a light rain falling beyond this line of trees. 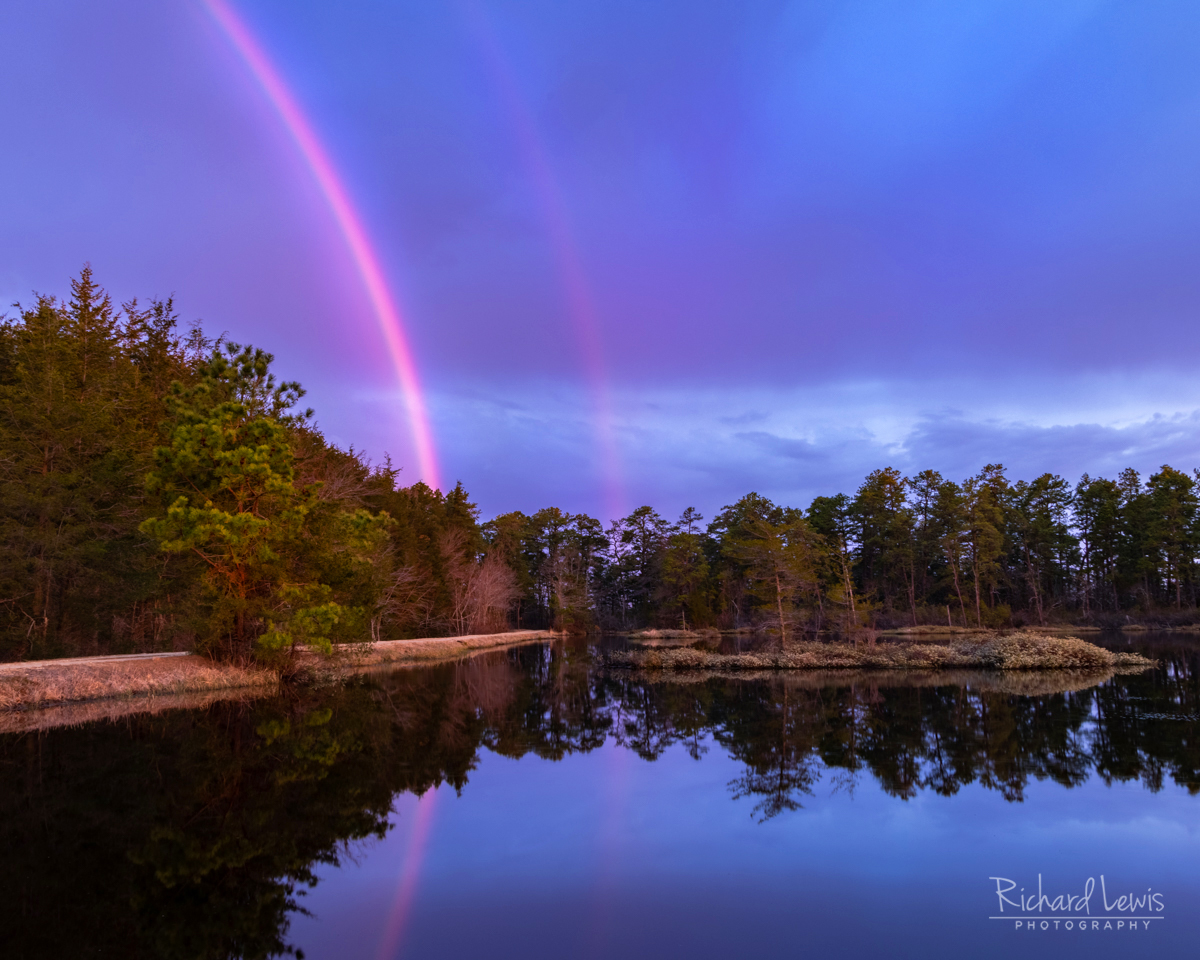 Then a beautiful and epic sunrise. 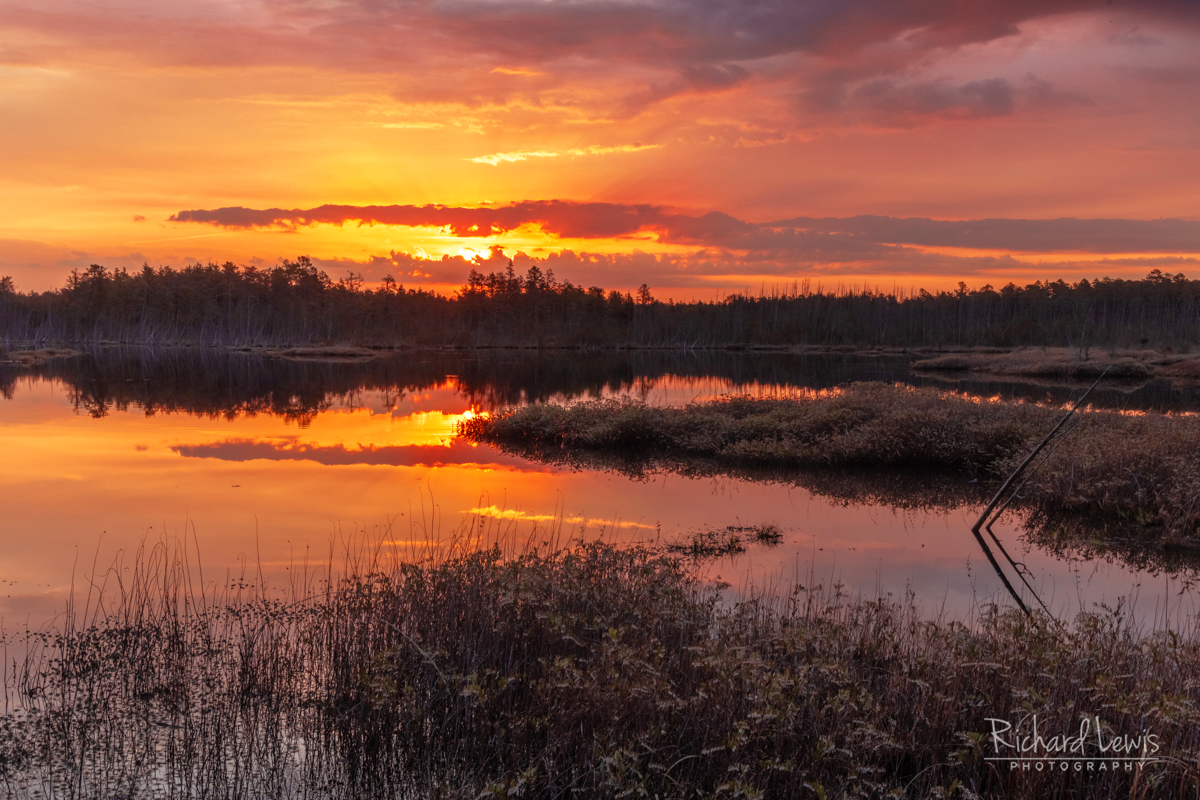 The epic sky drama continued after the sun rose, but this is the photograph below is the one that struck me as the most meaningful. 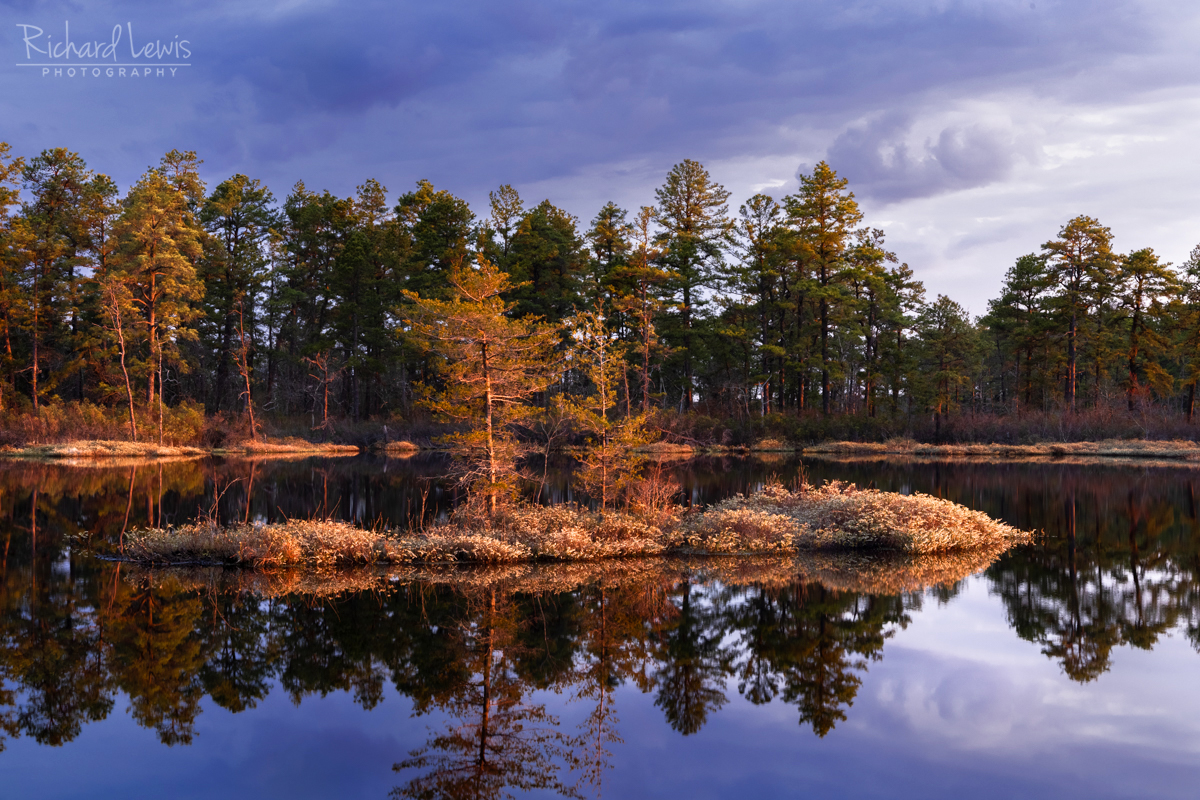 The above image became the epiphany that lead to this blog post. Why? Because it is all about the the landscape with the sky playing a minor supporting role. The little island is nicely lit showing hundreds of little white flowers blooming on Leatherleaf plants. The shadows and highlights show the rich texture of the landscape as a whole while the sky is dramatic enough to add to the composition’s mood, but not overwhelm morning light illuminating a Pine Barrens spring bog.

As landscape photographers we need to cultivate a desire to put the emphasis on the land in our landscapes. It helps us bond and deepen our feelings for the natural world which we love to photograph. It opens up possibilities to create unique and original photographs at just about any time of day.